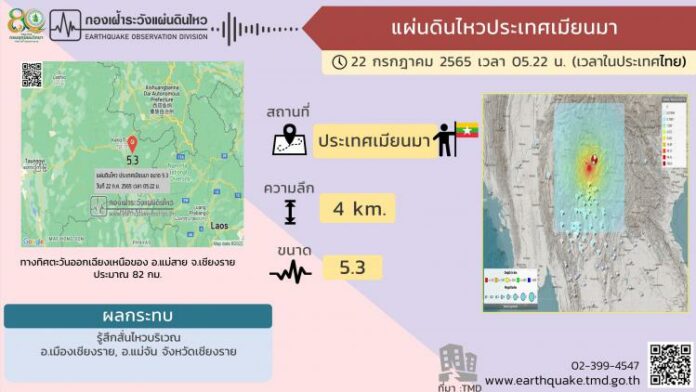 Thailand’s Earthquake Observation Division of the Thai Meteorology Department reported that Chiang Mai and Chiang Rai provinces of Thailand felt tremors from a 6.4-magnitude earthquake that occurred in Myanmar since the early hours of this morning, July 22nd.

The epicenter was found about 82-87 kilometers from the Mae Sai district of Chiang Rai, the Thailand-Myanmar border. Milder quakes were reported several times later after midnight.

As of 05:22 AM. the last 5.3-magnitude tremor was recorded and could be felt in Chiang Rai’s Muang, Mae Chan, Chiang Khong and Chiang Saen districts, and Chiang Mai’s Muang district.

There were no reports of property damages, losses, or injuries caused by the earthquakes in Thailand yet.