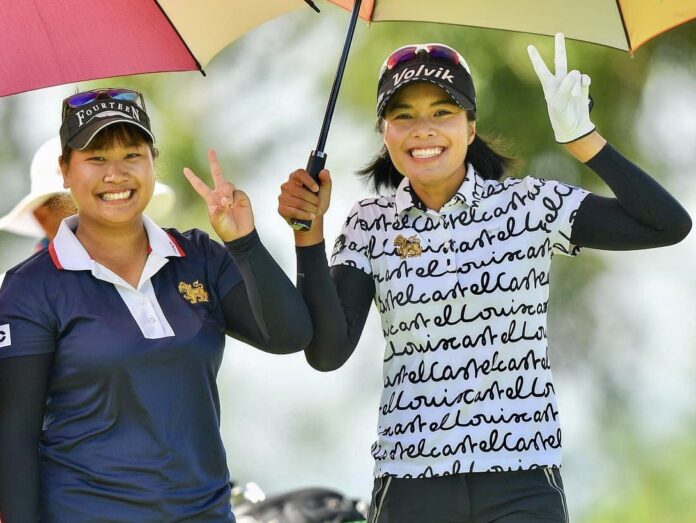 Former champions Parinda Phokan and Chanaettee Wannasaen hope to produce the eye-catching form as they tee off next week in the “SAT-TWT Open” Road to World Ranking due at the Phoenix Gold Golf and Country Club in Pattaya.

First circuit winner Parinda from Khon Kaen and second circuit winner Chanettee from Chiang Mai are among the top contenders as the Bt 2.5 million Thai WPGA event resumes between June 22-24 after a long interruption due to the COVID-19 outbreak.

Parinda who carded a total of eight under-par-208 to beat Arpichaya Yubol by two strokes to win the inaugural Thai WPGA at Lake View Resort & Golf Club last September said: “I’m excited that we finally get to play the first Thai WPGA event this season after almost a year. I’ve been quite prepared for this tournament and I want to play like that the way I do during the practice. I’m happy that we have a lot of Thai WPGA events (eight) coming up. It will be quite a challenge.”

In terms of her game plan at the Phoenix Gold, the 24-year-old player said: “Due to narrow fairways, tricky greens, and windy conditions, it is one of the challenging courses. It’s a great opportunity for you to learn and test your game.”

Eighteen-year-old Channettee who beat Arpichaya by a stroke in circuit 2 at the Phoenix Gold last November will have all eyes on her after sweeping five local titles so far this year.

“We are really looking forward to this tournament after a long break. In terms of my preparation, I’ve working on my weakness and I hope to have a top 5 finish. However, I don’t want to put myself under pressure as a former champion. I will try to stick to my game plan and do my best,” said the promising teenager who won the National Qualifiers which earned her a spot in the Honda LPGA earlier this year.

The Thai WPGA event, organized by the Thailand Women’s Professional Golf Association, aims at becoming a world-ranking tournament in the future. At least 10 tournaments, each with minimum overall prize money of Bt2.5 million, must be held per year and at least for two consecutive seasons, in order to seek sanction from the governing world ranking body.

“To have a local tour with world rankings, it will be a great pathway for us to play in international events and in some big events as well. We hope to have this kind of continuous support,” Chanettee added.

The SAT-TWT Open Road to World Ranking, the first of all eight circuits in 2022, will be competed in a three-day stroke-play format with a total of 54 holes (18 holes each day). The field acceptance will not exceed 132 players with only top 60 and ties, after 36 holes, proceeding to the final round. The winner will receive the top prize money of Bt367,500.

The Thai Women’s Professional Golf Association has been established with the objective to support and promote Thai women’s golf activities. The association aims at organizing a local tours with world ranking points in the near future which will pave the way for Thai golfers to the international arena. In addition, Thai women’s golfers can use the tour to develop their skills to meet the universal standard. Moreover, medium-proficiency level players can gain experience from Challenger tours which can help produce new generation players and at the same time develop golf human resources and systematic golf organization locally.