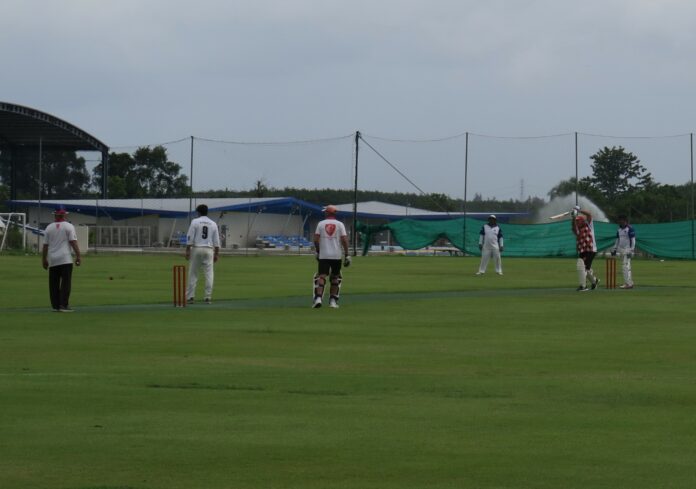 The Durnford-Philbrook Trophy series between Pattaya CC and The British Club CC has been played for more than 10 years and although a “friendly”, it is a keenly contested event with the trophy being held by the aggregate winner of the year’s matches. PCC has held the Trophy for most of its life.

The match was played at the Pattana Sports Resort on Sunday 12 June on a searingly hot and sunny day but luckily the afternoon clouds rolled in to cool the players.  The match was a 25-over affair played to Bangkok Cricket League rules but with batsmen retiring at 50 runs. It should be noted that PCC was without, Luke Stokes, Ryan Driver, Tom Fogden, and Colin Clark.

Captains Andy Emery (PCC) and Ben Eastwell (BCCC) conducted the toss which PCC won and chose to bowl.  BCCC sent in Rhaul and Ed Khan to open against the bowling of Habby Singh and Jainish Parikh.  Both batsmen made a great start with 17 in the first two overs, by which time Habby found his line, but it was Jainish who struck first. Ed got a thick edge and Wez Masterton, back in his position of yesteryear, took an easy catch and Ed went for 11.  Dale Lamb, an accomplished batsman, took the crease but took some time to get going against Crunch and Andy’s first overs.  Meanwhile, Rahul was steadily accumulating runs.  Animal was having a very enthusiastic day in the field and diving everywhere – no mean feat for such a large unit and saving runs.  The groundsmen will repair the dents later.  Dale had some luck when an edge caught Wez by surprise and he couldn’t get a whole glove on the ball. Andy came in for severe punishment in the 8th over when he was smashed for 28 runs by Dale, which caused Dale to retire on 51 from 23 balls and brag for hours at how he’d smashed the BCL Div A top wicket-taker.

Animal entered the bowling attack with his slow dibbley dobblies which slowed up the run rate as BCCC passed 84 in 10 overs.  Stuart Morgan, a debutant, found it difficult to get his line and Koustav had a loose first over but recovered to bowl well. Drinks at 15 overs saw BCCC at 114 and zooming along at 7.6 per over.  Rahul was batting well and on 41, when in the 19th over, he faced Habby who fed him a jaffa of an in-swinging yorker to remove his leg stump.  148 for 3.  Mossy arrived at the crease full of his usual confidence and was given a wide-ish leg spinner which he dispatched for 4.

The next ball was another snorker from Habby – another quick in-swinging yorker and Mossy went back to the tent.   152 for 4. Dilip Mishra joined Ben Eastwell at the wicket and immediately got runs at 5 per over or so until Animal induced Ben into a dance down the wicket followed by a swing and a miss.  Wez stumped Ben stumped for 35 and 175 for 5 in the 23rd over.  Dilip drove a ball to Stuart at Point who dropped it like a hot potato, and Dilip survived a little longer.

Shivam, a lefty, took the crease and so Animal changed sides in the field from Mid-off for a righty to Mid-off for a lefty.  Shiv hit the ball straight to Animal and Dilip, who’d taken leave of his senses, took off down the wicket.  It wasn’t Dilip’s call and it was a suicidal run, so Shiv stood his ground, and Dilip was run out by 3 miles.  All finished on 188 for 6 from 25 overs.  A good score and a challenge to surpass.  PCC figures included Habby with 3 overs 2 for 18 and Jainish 2 overs 1 for 9 and Animal finished on 3 overs 1 for 11.

PCC sent in Wez and Amit as their openers against Dilip, Shivam and Rahul.  Wez was on the warpath and dispatched the ball out of the ground in all directions. Amit rotated the strike wisely and Wez retired on 54 after 14 balls.  60 for 1. Dale from BCCC stopped jabbering and Habby took the crease.   Amit succumbed to Dilip in the 5th over by being bowled for 7 and Habby only lasted another over before he was bowled by Rahul for 5 for a very rash swing and miss.  67 for 3 after 6 overs and PCC were well ahead.

Jainish and Stuart, with Jainish taking the lead and Stuart rotating the strike or bravely blocking with his pads, continued against some accurate bowling from Ed Khan.   Jainish then smashed Shivam and Ben for 41 runs in 2 overs and retired on 51 from 26 balls. 129 for 4 in the 12th and PCC still comfortably ahead.  Andy came to the crease whilst Stuart soon departed, caught AND stumped by wicket keeper Dale for 6 off Manish.  140 for 5.  Drinks at 15 overs saw PCC on 154 and cruising.

Andy and Simon Philbrook took a steady toll of the BCCC bowlers but mainly from Manish, Mack, and Lenny.  Lenny managed to drop 2 balls whilst standing on the boundary for 6’s but finally managed to hold onto one to dismiss Andy for 29 off Maks’ bowling. 182 for 6. Simon received a no-ball and managed to hit the free hit to Ben at Point, lucky Simon survived to finish 18 not out and Crunch hit the last ball of the match for a winning 4.  PCC 189 for 6 in 18.3 overs and a solid win with plenty to spare.  BCCC’s best bowler was Ed Khan with 2 overs 0 for 10.

It was a superb match and finished just before the rain came.  There will be another match later in the year and as BCCC was promoted recently to the BCL Div A, PCC will be playing them more regularly from November, but with their 1st XI. 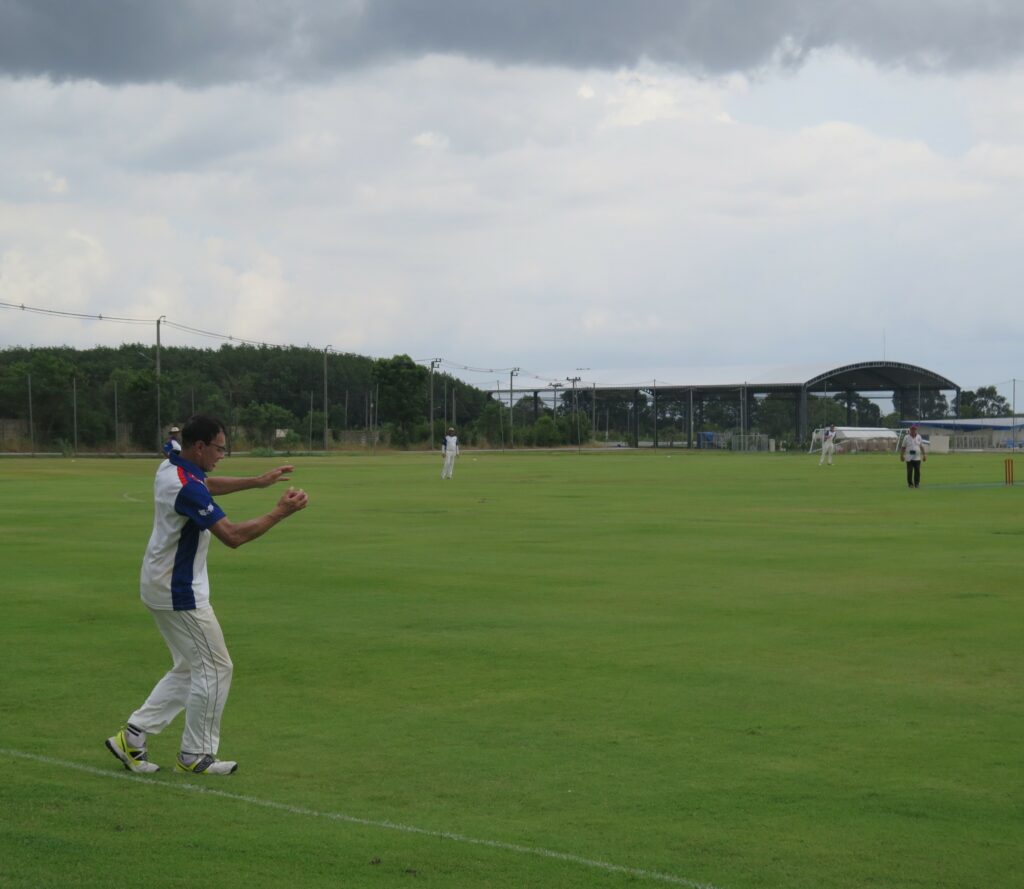