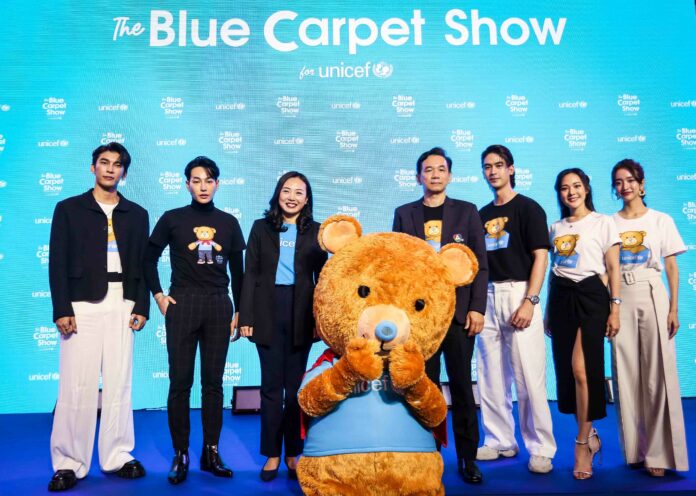 BANGKOK, 17 June 2022 – Friends of UNICEF, leading celebrities, and the private sector join the Blue Carpet Show for UNICEF, a televised variety show by UNICEF, to mobilize support for children in need in Thailand and around the world, particularly those most vulnerable and facing challenges during the COVID-19 pandemic. The show will go live on Channel 7HD on Saturday, 2 July 2022, from 6 to 8 p.m.

Hosted by Kai Samapol and Tuitui Putthachart, the fourth edition of the Blue Carpet Show will bring Friend of UNICEF Peck Palitchoke Ayanaputra and leading celebrities, such as Pexky Sretunya, Off Jumpol, Gun Atthaphan, Trinity and many more from Channel 7HD, to perform onstage and make surprise calls to personally thank those donating to UNICEF during the show.

In addition to music performances, touching stories of UNICEF’s support in reaching children across the world will be shared in four short films featuring Friends of UNICEF and celebrities on missions. Peck Palitchoke will tell the story of how UNICEF Magic Box sets of books and toys are helping young children in Bangkok’s Klong Toey community continue their play and learning despite COVID-19 disruption. On her mission to Lamphun Province, Friend of UNICEF Min Pechaya Wattanamontri will show how oxygen concentrators helped save the lives of people with COVID-19 and respiratory diseases in remote areas. Kem – Hussawee Pakrapongpisun, an actor from Channel 7HD, will tell the stories of children with severe acute malnutrition in Malawi, while UNICEF Thailand Goodwill Ambassador Mr. Anand Panyarachun will talk about UNICEF’s Blue Dot refugee support centres that are helping children and families fleeing the war in Ukraine.

Throughout June, fans of BNK 48, Off-Gun, Up Poompat, Poon and Offroad, and Sky Wongravee can take part in activities under the Blue Carpet Show for UNICEF, such as the JOOX Live Room and Photo Studio with their favourite celebrities who will be raising awareness and mobilizing public support for children in need.

The Blue Carpet Show for UNICEF is supported by Channel 7HD, which provides free airtime for the show; Central Group as the Teddy Blu Collection partner, which provides 100 percent of the profits from merchandise sales to support UNICEF; as well as Platinum-level sponsor Supalai, Silver-level sponsor Bangkok Bank and corporate partners Siam Cement Group, Central Pattana, and Mobile Connect.

In the past 75 years, UNICEF has worked for child survival, protection, and development in more than 190 countries and for children affected by emergencies such as the COVID-19 pandemic.

To make a purchase from the Teddy Blu Collection, please visit:  or www.centraltham.com/bluecarpet   The merchandise will also be available from 15 July at Good Goods in the CentralWorld shopping centre.

To make a donation, please use the following: