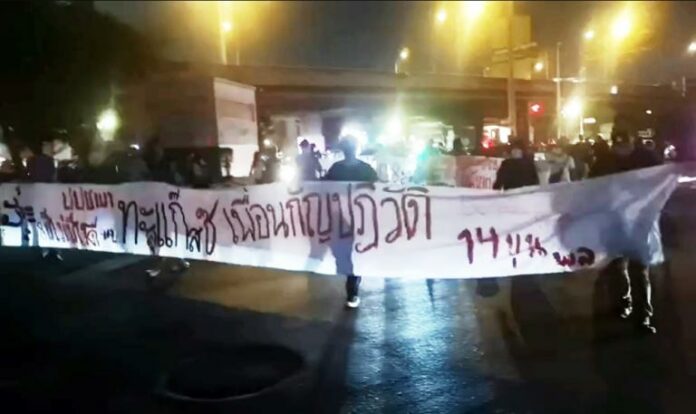 The gathering started at around 4:30 PM. when a number of crowd control police officers were deployed in nearby areas to monitor the situation and maintain peace and order.

The protesters then held banners with written messages, demanding the PM’s resignation, and began marching to the Prime Minister’s military housing at the 1st Infantry Regiment. However, police forces had installed blockages and were stationed at the Vibhavadi Rangsit Road to obstruct them from passing. A confrontation was reported when the protesters and the officers reportedly began snatching banners and attacking officers. The crowd control police constantly tried to push the protesters back from the area on Vibhavadi Road.

As of 8:50 PM., the majority of protesters retreated to the Din Daeng intersection and continued gathering. Some firecrackers were heard and there was a slight confrontation as some of the protesters attempted to move forward to the Vibhavadi Rangsit Road. Some injuries were reported and were rushed to the nearest hospitals.