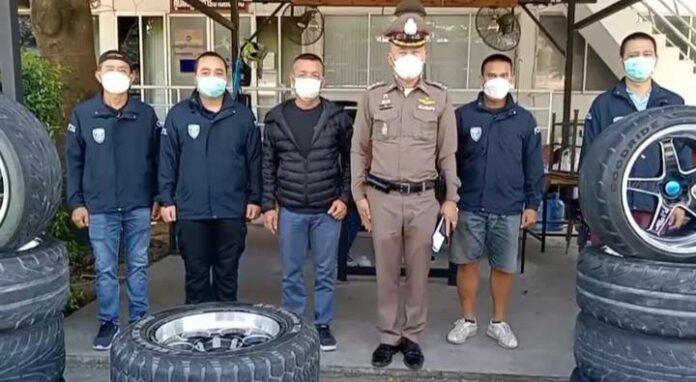 An alloy wheel thief was finally arrested by Laem Chabang police. The thief was reportedly involved in several identical cases around Sri Racha and Bang Lamung.

At 1 p.m. today, May 25th, Laem Chabang police held a press conference to announce the arrest of a 23-year-old alloy wheel thief, Thanawat Pankaew, who had reportedly been stealing alloy wheels from Sri Racha and Bang Lamung residents’ cars. According to the police announcement, Thanawat specifically targeted cars parked around Sri Racha and Bang Lamung and stole five alloy wheels in the last month and sold it on Facebook before being arrested at his rental room in Bang Lamung. The police also confiscated another ten alloy wheels from his room. The suspect claimed that he was short of money and was in debt, so he needed to commit this crime. He also had two allies who aided him in each crime and were still at large. Laem Chabang police vowed to bring the remaining suspects to justice and return the victims’ property.