Representatives from civil non-profit organizations in Thailand gathered in front of the Government House today, May 24th, to oppose proposed regulations for public gathering controls and other regulations in the Organizational Activities Act.

Somboon Khamhang, a leading environmentalist from the Chana Ruk Thin group, had led the protesters from the United Nations, where they had staged an overnight protest since Monday, to the Government House this morning to protest under the campaign “8 years: stop the NCPO powers expansion”.

They called for the end of the government’s Organizational Activities draft consideration which, according to their statement, obstructs NGO/NPOs’ activities as well as other regulations that suspend public gatherings to limit people’s opinions, expressions, and exercising of rights and freedoms. 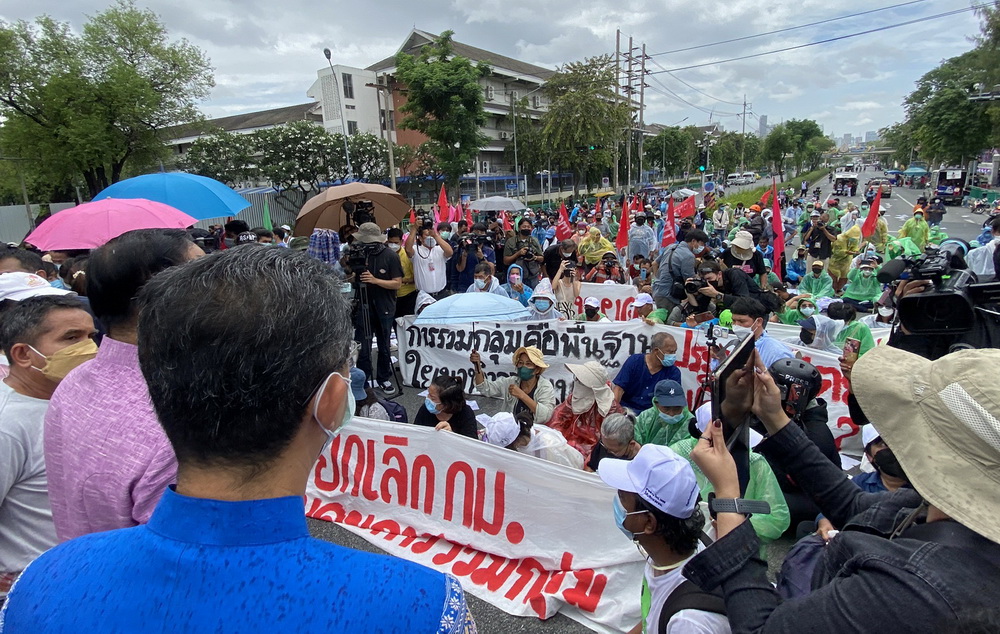 Groups of crowd control police and two water trucks were also stationed nearby to maintain peace and order and ask the protesters to gather peacefully. The group representatives eventually reached the Government House where they met Prime Minister’s Office Minister Anucha Nakasai.

He received the group’s request and promised to study the cases and present them to the Cabinet for consideration. The protesters insisted that they would continue gathering until the government had a conclusion.

Meanwhile, Deputy Prime Minister Wissanu Krea-ngam stated that the government had acknowledged the gathering and its purpose. Initially, the Organizational Activities Act was drafted to initially examine any private organization that may receive funds from foreign companies/branches. Such foundations/associations are required to report their financial status, according to the draft.

“The draft may upset brothers and sisters who were in the NGO/NPOs. But we’d like to review if the draft would not include domestic organizations that did not involve foreign interference or support and did not abstain from any forms of public gathering,” the Deputy PM stated.