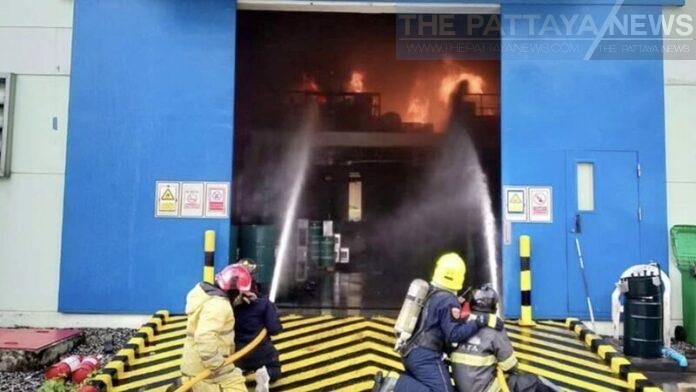 A fire reportedly caused by an explosion gutted a thinner and paint manufacturing plant in the Mueang District, Chonburi, and severely burned one worker.

At 2 p.m. on May 21st, Pol. Capt. Suchayyot Chuaykaew from the Don Hua Lor Police Station was notified of a large fire at a thinner and paint manufacturing plant in the Amata City Industrial Estate, Don Hua Lor Subdistrict, Mueang District, Chonburi. Almost 10 fire trucks rushed to the plant following the notification.

The officers discovered a large fire inside the facility and took an hour to extinguish it. According to the report, two workers were injured, including Suthep (last name withheld), 44, who sustained severe burns all over his body, and Suthat, 18, who was slightly burned and choked on smoke. Both of them were transferred to the nearest hospital.

According to one of the injured workers’ statements, an explosion occurred during the process of mixing the thinner, leading to an abrupt burst of flame. Chonburi police said they would examine the plant for possible legal action.
=-=-=-=-=-=-=-=-=-=-=-=-=-=–=–=–=–==-