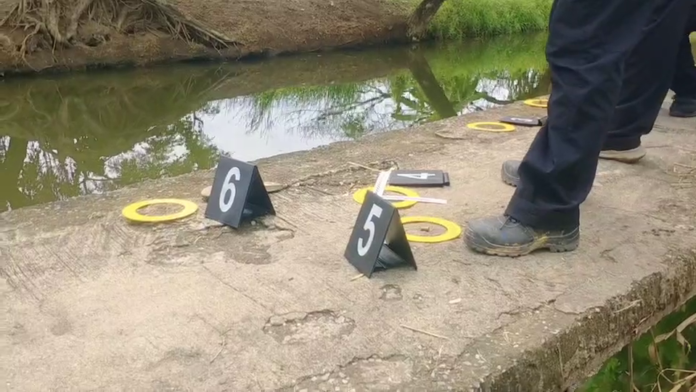 The body of an unidentified man with gunshot wounds was found floating in Klong Wang Yai in the Saphan Sung district of Bangkok yesterday morning, May 16th, expected to be dead for about 2-3 days.

Police Major Colonel Apiwat Sinpru and officers from the Prawet Police Station arrived at the scene at around 9:00 AM. after being notified of a murdered Thai national at the end of Soi Krungthep Kreetha 27.

Upon arrival, the male body, expected to be about 30-35 years old, was found floating above the water, wearing a plaid shirt and blue long jeans. The authorities assumed that he was dead for about 2-3 days.

The rescue volunteers then took the body out of the water and began the initial examination. Three 9-mm gunshot wounds were found on the left part of his skull, as well on his left and right ribs. A tattoo was found on his left chest written “Sararee-Chamroen”. Moreover, a 10-inch-long kitchen knife was found attached to his waist while two 9-caliber bullet shields were found on the ground near the canal as well as a left slipper. All of them were confiscated as evidence.

According to nearby local residents, they reportedly heard several gunshots 3 days ago around 3:00 – 4:00 PM. They did not hear people quarreling or fighting, so no one came out to look at the scene. This area was also reportedly not a stranger to crime or gunshots so residents did not find the incident entirely unusual.

Prawet Police would collect evidence and investigate the case, especially the name written on the man’s chest as police expected that they could refer to the loved ones of the deceased.