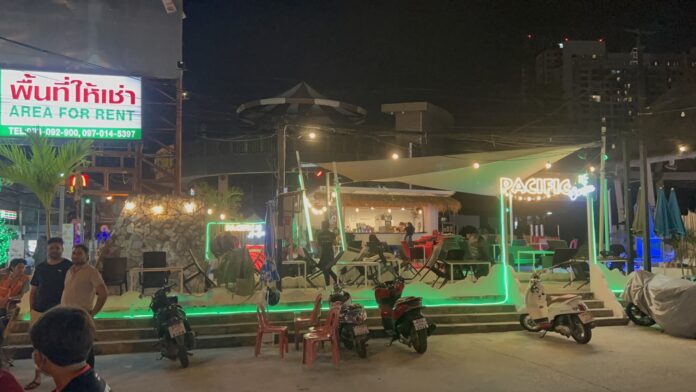 Reader Talkback Thailand: As tourists return, so does traffic..how should Pattaya deal with Soi Buakhao traffic around Tree Town at night?

Some context around this question:

Since Test and Go was dropped on May 1st, Pattaya is seeing an increase in visitors and this is expected to rise as the months go on.  With this, of course, comes traffic.  Tree Town, around LK Metro and on Soi Buakhao, had become a highlight of bars and entertainment during the pandemic, and appears it will stay that way. However, this has led to noticeably more traffic on Buakhao, especially at night. How should authorities deal with this?

Sean-“An increasing amount of tourists and foot traffic, especially around the Tree Town market area.” This includes intoxicated locals and tourists using the street to walk late at night.
People disregard traffic rules and park their motorbikes on both sides of the road, limiting the ability for traffic to flow.
Baht buses (songtaews) stop for customers at unapproved stops, delaying traffic.
Lack of stop signs/traffic lights at several major intersections, such as Soi Diana and Soi Chiayapoon, which cause backups and delays.
Motorbike taxi drivers have increased in the area and set up stands in areas that should accommodate vehicle traffic flow.
Food carts parked in areas not designated for them and slowing traffic”.
Since the region has so many bars, one would expect to find intoxicated people walking around and as far as people breaking traffic rules by parking motorbikes on both sides of the road, personally, I’ve seen no evidence of signs that say it’s illegal to do so.
In addition, food carts and motorbike taxis setting up in the area is a natural thing for these small businesses to do since that’s where they’re likely to find customers so no surprises there and as far as I’m aware, there are already rules in place which restrict baht buses stopping anywhere except at designated bus stops (which BTW are difficult to find because they’re not clearly marked) but if police and local council authorities want to change or rectify the situation, they should make it illegal for these people to carry out their businesses in these regions and have parking officers police the region and issue on the spot fines accordingly as is done in other countries in similar situations.

Alex B-There is really only 3 solutions. Either 1. ban all parking (which is unfair on businesses, but could be considered after 5 PM), 2. make it the soi one way, or 3. provide better parking facilities. I suppose stopping cars and trucks in certain areas after 5 PM also might work. There are many small sois into and out of the area so setting up detours to direct cars and trucks after certain hours, could work. Effectively this would lead to making parts of the soi a walking street and I am pretty sure, that would be discouraged.

Stubi-Soi Buakhao is not the problem. It was always there and didn’t change. But obviously, it wasn’t a good idea to build Tree Town and many other bars there. There are not even pavements and so the people have to walk on the road. In addition to the traffic situation, people in this area suffer a lot from extreme noise. But obviously, the bars are more important than traffic jams and noise.

Kyle N-The best solution is to shut down Tree Town bars. They are noisy, attract crime and prostitution, and could be replaced with a temple or family-friendly attraction. IMO, shut down ALL bars on Buakhao and the problem will be solved.

Romano-Best would be to make this small street a one-way street. so to drive
only from the north to the south. There are enough other small streets
to go to the 2nd road and go back. So one way not only during “rush” hour,
complete daytime and also no parking on one side of the street. Or make
the rush hour time an additional walking street if the one-way street
will not work right.

Flemming R-Making it a walking street, even just at night, would be difficult. With all the intersecting roads, it would affect the whole area. Making many side roads, and dead-end roads. There are still many hotels in the area.

Jeremy C-I like that there isn’t a single mention that people going into Treetown shouldn’t be driving in the first place. Install a DUI checkpoint at both ends and watch it become a pedestrian zone.

Roger C-No parking and only allowed to drive for residents that’s how many other cities solve it, works fine

Peter S-Problem is daytime also so no deliveries after say 12, only bikes and songthaews allowed. Jams are caused by deliveries and cars, pickups stopping

Steve D-Maybe put up signs that let people know that the second and third roads exist and lead to the same places as Buakao. Most tourists have no clue where the sois on Buakao end up, so they won’t turn either way and instead clog up an already busy street.

Gian R-One way my balls, I live on the second road which is one way and I have seen even cars going the other way. No CCTV, so as long as the Police don’t see them, they will continue doing it. Soi Buakaw will have to be the next walking street, with police officers on both ends.

Jay J- Soi Buakhao is fine. The “traffic” there is because ppl want to be in “traffic” and look around

Finishing the roadworks and easing congestion elsewhere should be a much higher priority
-=-=-=-=-=-=-===-=-=-
Blake B-There is good things to be said about Soi Buakhao, but it’s truly amazing to me several people aren’t killed there every day in traffic mishaps…the traffic situation is appalling…
-=-=-=-=-=-=-=
Ramon C-The obvious thing to do is make it one way traffic and close the bars at 11pm so people go home and the traffic problem will ease up
-=-=-=-=-==-=-=-

Didn’t get a chance to chime in? Tell us on our social media channels, in the comments below, or if you prefer your comment to be private mail us at Pattayanewseditor@gmail.com. Have a safe week and see you soon!