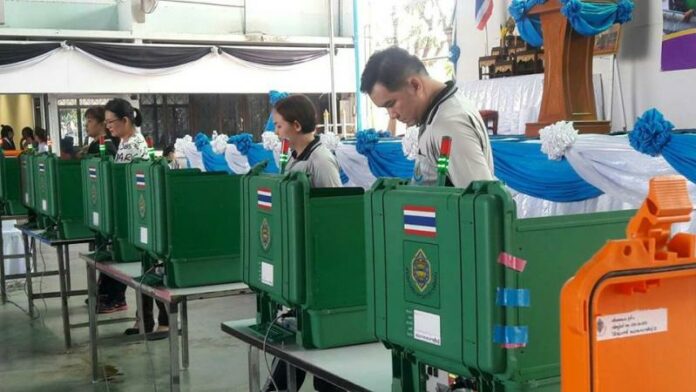 The Chonburi Election Commission predicted that 70% of the 78,415 Pattaya voters would vote in the upcoming mayoral election on May 22nd. They also revealed they were nudged about a vote buyer allegedly paying 1,000 baht for each vote.

The Chonburi Election Commission held an election campaign yesterday, May 12th, at the Amari Pattaya Hotel, to remind Pattaya voters of the city’s first mayoral election in almost a decade on May 22nd. Many relevant authorities joined the event.

According to Mr. Sawang Boonmee, the Election Commission secretary, he instructed all officers to take extra precautions against excessive ballots that used to be problematic in the last election. He emphasized that this election must be void of errors.

Pol. Capt. Chanin Noilek said that he was nudged by a senior civil servant in the Pattaya area about an anonymous vote buyer who paid 1,000 baht for each vote as well as some candidates who exceeded the election poster limit. The Pattaya police chief was aware of these concerns and was investigating them, said the officer.

Another Election Commission authority, Witchuda Mekanuwong, told The Pattaya News that there are 78,415 voters in total from 146 polling stations. There are 4 mayoral candidates and 73 council member candidates. The ballots have already been printed, which she said will be blue for the mayoral election and orange for the council members. She said the goal was to get 70% of the voters to vote.

A parade, concert, and rally was also held yesterday afternoon, May 12th, on Pattaya Beach Road to encourage voters to go to the polls on May 22nd as well as provide some entertainment for tourists.