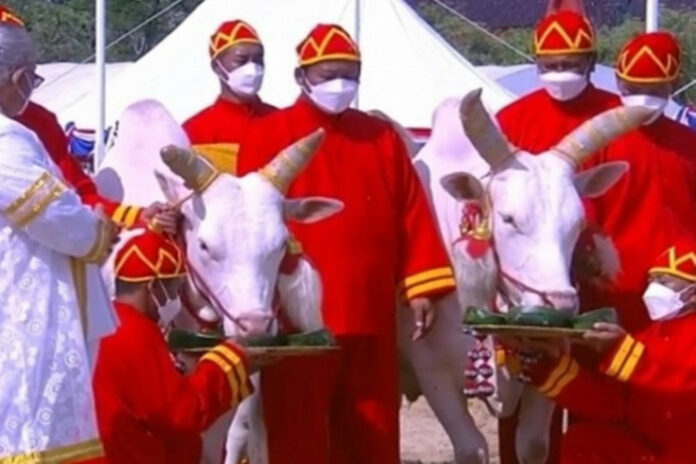 Two sacred oxen were eating beans and grass and drinking water and liquor at the Royal Ploughing Ceremony staged at Bangkok’s Sanam Luang this morning, May 13th, predicting that this year’s rice-growing season in Thailand will be prosperous and the economy will improve.

The ceremony was presided over by His Majesty the King and Her Majesty the Queen and was held for the first time in two years after the Covid-19 global pandemic.

The ceremony began at 8:19 AM. with the oxen plowing a furrow on the ceremonial ground before the officials started scattering rice seeds, symbolizing the beginning of the cultivation season.

The oxen then were offered nine types of food and drinks on a platter for a traditional agriculture interpretation ceremony. The selection of water, beans, and grass was interpreted as plentiful rain and food supplies, while the liquor meant convenient transportation, flourishing international trade, and a prospering economy.

Agriculture Permanent Secretary Thongplew Kongjun, as a Ceremony’s Ploughing Lord, was also offered three pieces of cloth of different lengths and has selected the shortest piece of cloth, predicting that there will be a bit more rain in the country and rice crops on the uplands will be fertile, while those on the lower grounds may experience some damage or not plentiful.