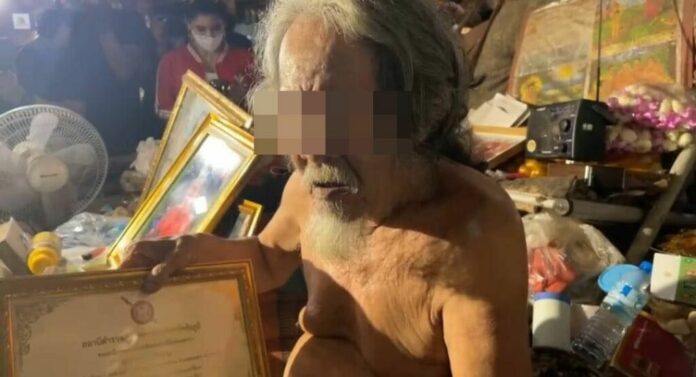 Loei governor Chaithawat Niamsiri ordered an urgent investigation in the province after being informed that a recently-bailed cult leader was planning to set up a new sacred office to produce “natural” medicines out of feces, saliva, phlegm, and urine.

The 74-year-old cult leader, who was later identified as Tawee Nanla, was arrested in a dramatic raid on Sunday for reportedly offering bizarre medical treatments which involved eating feces and drinking urine and phlegm. He was taken for interrogation and charged with various offenses such as violation of the emergency decree which prohibits unapproved mass gatherings due to Covid-19 and was bailed on the following day. Multiple dead bodies were also found on his property.

However, the governor’s order came after a Facebook account, which was believed to belong to one of his followers, wrote a status online that the “Father of all Gods”, Tawee’s title as he reportedly believes he is the father of all gods past and present, and a group of his followers were heading to Pha Nok Khao in Loei Province to establish a new office, this time on legal land.

However, “natural” medicine made out of human feces, saliva, phlegm, and urine will still be produced, according to the online statement. The ‘Father’ will also be selling much tamer rice crackers and chili pastes to help boost the local economy.

Governor Chaithawat then immediately ordered the Phu Kradueng District Chief and local authorities who were responsible for the Pha Nok Khao area to closely inspect and follow up on the reestablishment of the sacred office in order to prevent violations of various health-related laws.

The Father of All Gods remains free on bail as of press time.