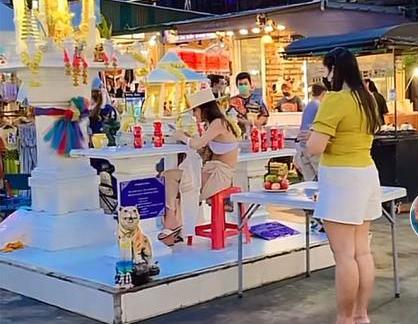 Local reporters went to examine the area of Chillva Market in Phuket yesterday, May 5th, after a video of a female foreigner caught sitting at a table at a shrine and playing her mobile phone went viral in Thailand.

The video showed the foreigner was sitting on a chair in front of the shrine of the market without realizing that she was sitting at a top where people would place flowers, beverages, and offerings to the shine.

Clothing vendor Pussadee Chakmanon told reporters about the incident that she saw the tourist sitting at the shrine. She then greeted her before paying respect to the shine.

“She probably didn’t know. she was sitting and playing on the phone and no one told her about it. I understand that she didn’t know our culture,” she said.

Another trader Wirot Somjit who also witnessed the incident said that there were two foreigners and one of them was running out of their phone battery, so she stopped at the shrine to charge her phone because there was a cable wire nearby.

She was sitting there for about 10 minutes until a customer advised her not to sit here and explained to her what she was sitting at. Then, some also said to her that it was inappropriate.

However, TPN notes, some Thais have stated online they were deeply offended and wanted the tourists to be found and apologize or even be fined or punished. It is unclear if law enforcement plans to do so.