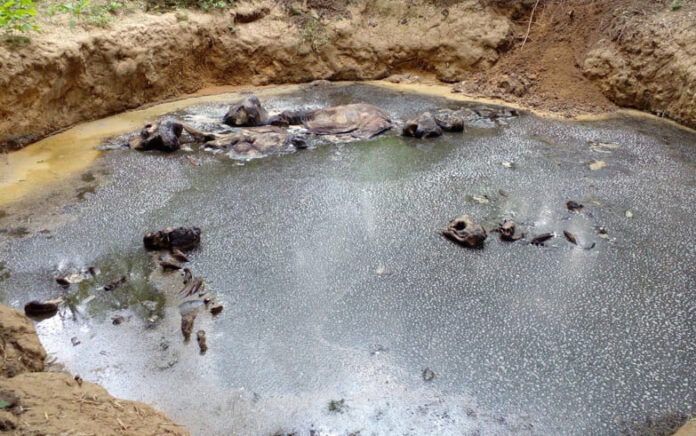 The pictures were first posted on a Facebook page, showing the sinking carcasses of the wild elephants in the soil pit. Pichet Chaisawat, Chief of the Lam Khlong Ngu National Park, then alerted the supervisors about the fatal incident of the elephants on Thursday afternoon.

The officials then arrived at the reported scene in the national forest near the area of the National Park and discovered the said carcasses of five elephants, including two adult elephants, a teenage elephant, and two calves. They were estimated to be dead for more than 2 months. Their genders were unidentifiable.

A preliminary inspection revealed that the incident area was caused by soil collapse, possibly resulting from nearby underground mining. Many nearby areas were also collapsing into large holes, causing harm to wild animals and humans transpassing the area.

Initially, national park officers would install warning signs in the area to prevent people from entering the risk areas and would sprinkle hydraulic lime on the elephant’s bodies before burying them according to academic principles.