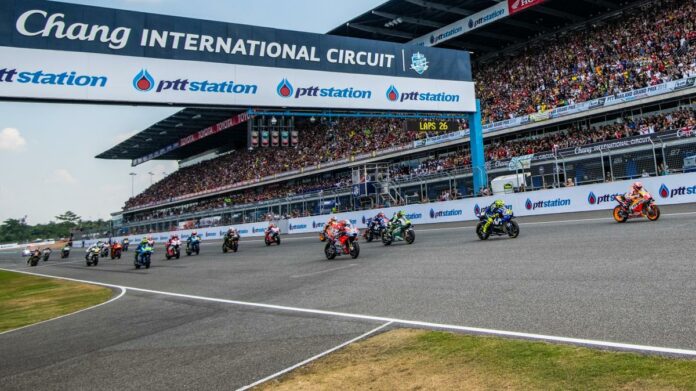 The Thai government has approved the organization of the Grand Prix motorcycle racing or ‘Moto GP’ in Buriram province after a two-year halt, expecting to generate millions of baht in tourism.

Public Health Minister Anutin Charnvirakul revealed yesterday, April 27th, after a meeting with the committee for organizing the Moto GP and the Minister of Tourism and Sports that the government agreed to organize the racing event this year as more than 80 percent of the total population in the country had received the first dose of Covid-19 vaccination and more than 36 percent received the booster shots. The health care system, including hospitals, drugs, medical supplies, and medical personnel, was also sufficient and ready to support the government’s endemic disease plan.

Anutin said: “After two years of event cancellations due to the Covid-19 pandemic, the government eventually gave a green light to organize MotoGP this year. It would be the country’s first world-class activity after the pandemic and would drive the domestic economy as well as building confidence among the public and the tourists who would travel into the country.”

“The latest Moto GP race in 2019 had attracted more than 50,000 tourists. Most of them also continued their traveling in other parts of the country which stimulated the economy especially in hotels, local accommodations, restaurants, souvenir shops in Buriram and other northeastern provinces.”

The Minister continued that this year’s Moto GP would be arranged in the form of ‘Sports Tourism’. The Sports Authority of Thailand (SAT) had signed a contract with the event company to host the event between September 30 and October 2, 2022, at the Chang International Circuit, Buriram.