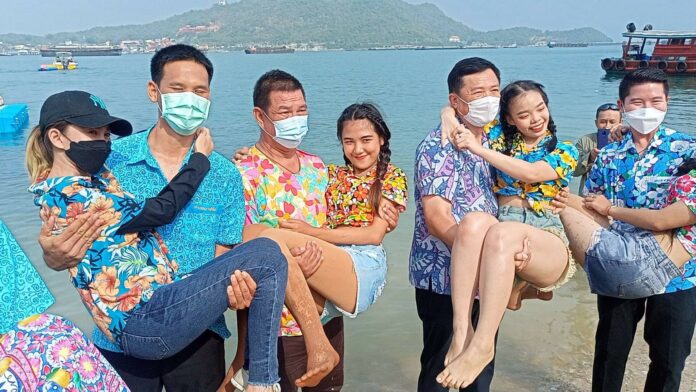 Chonburi officials hosted the “Carrying Girls into Water” event on Koh Kham Yai yesterday morning after it had been consecutively postponed for two years due to Covid-19. The traditional Songkran event quite literally is composed of physically picking up local village women from Koh Si Chang and carrying them into the ocean.

Yesterday, April 18th, Mr. Wittaya Khunpluem, President of the Chonburi Provincial Administrative Organization presided over the opening ceremony of the “Um Saow Long Nam” or “Carrying Girls into Water” event on Koh Kham Yai, Thewawong sub-district, Koh Sichang district, Chonburi. Koh Kham Yai is one kilometer away from the Koh Sichang district, and could be accessed by boarding a ferry on Koh Loi. The journey takes roughly 45 minutes. 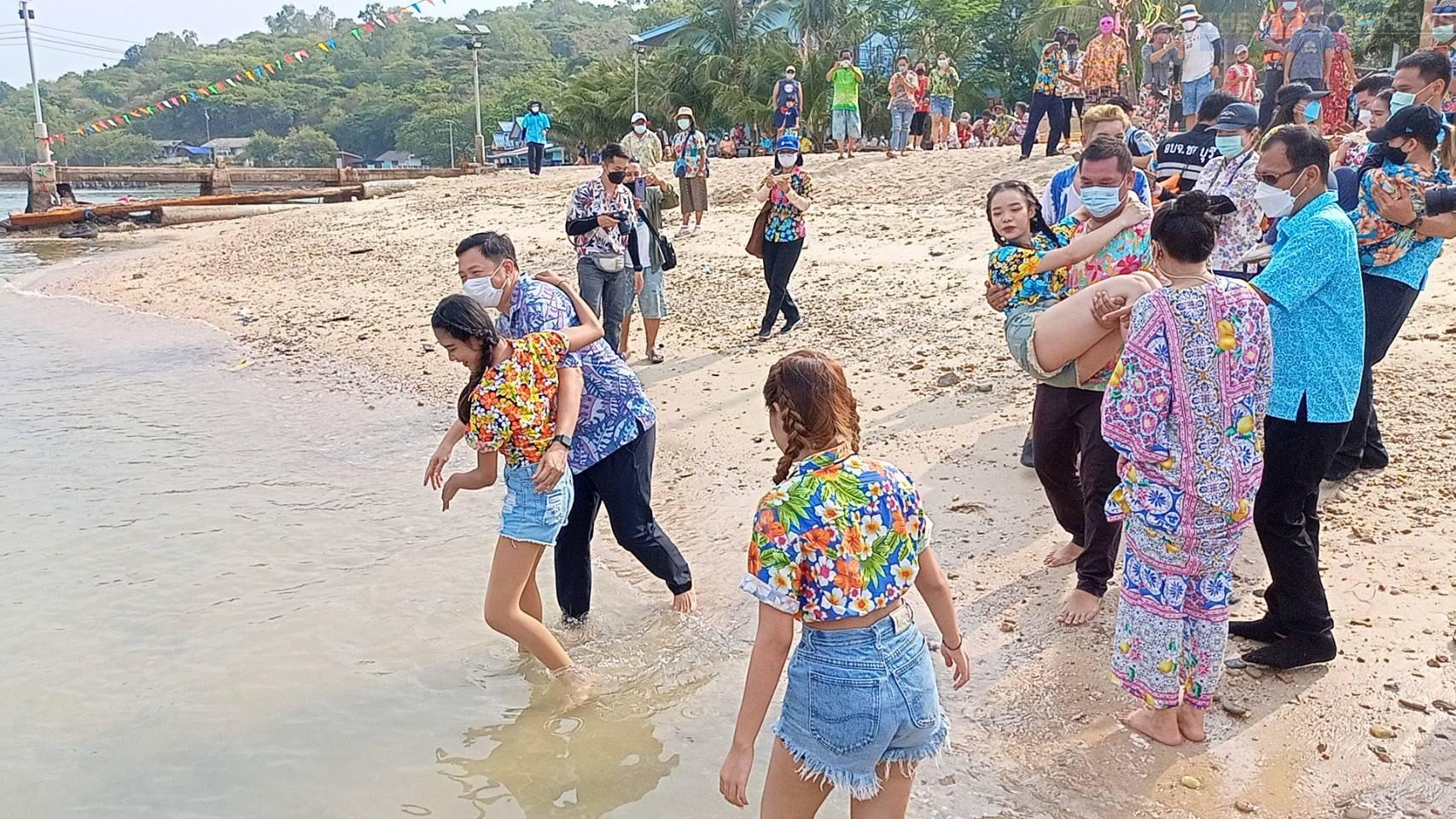 The “Um Saow Long Nam” event is one of the Songkran activities, which is held on Koh Kham Yai/Koh Si Chang every year; however, it needed to be put on hold for two years because of the Covid-19 outbreak. As of now, certain restrictions had been loosened, so the officials decided to bring it back yesterday morning. The event featured making merit, pouring water on Buddha’s statue, building a sandcastle, and carrying local women into the sea. 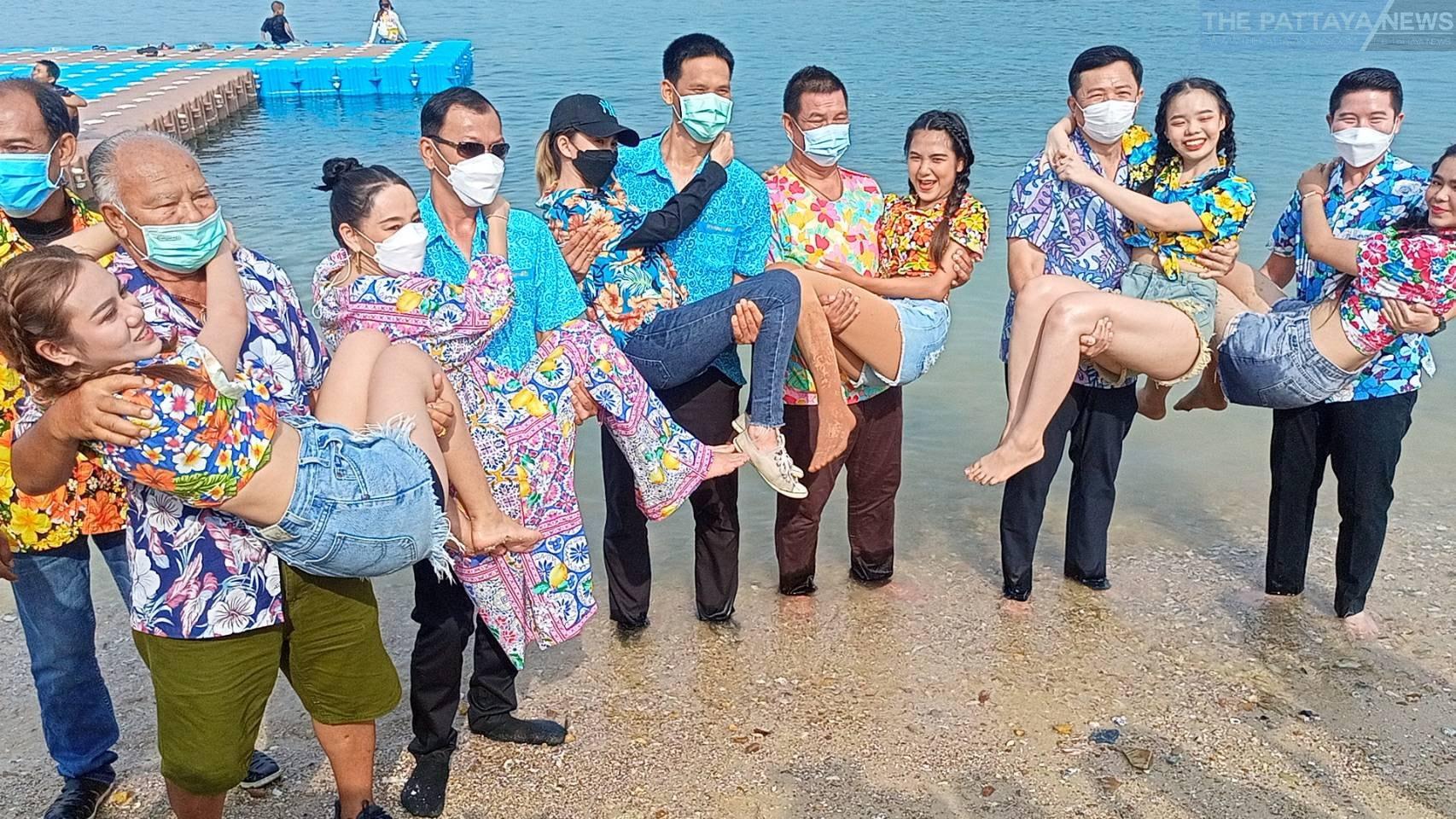 Mr. Thanet Phongsai, Koh SiChang mayor, told the associated local Thai media that the purpose of yesterday’s event was to preserve some of the traditional practices of Songkran because water fights and splashing were historically not popular on Koh Si Chang and the surrounding islands due to freshwater scarcity. Moreover, the event was also an opportunity for locals, both men and women, who got into disputes before or liked someone to apologize or invite the person they would like to carry or hold hands and walk into the sea together. According to Thanet, the custom of Koh Si Chang men carrying village women into the sea for Songkran had been taking place for many decades, but was in recent years overshadowed by Pattaya’s wild water fights and large festivals.

According to Mr. Thanet, the event was very popular among tourists who came to the beach to enjoy the carrying festival, with some participating.