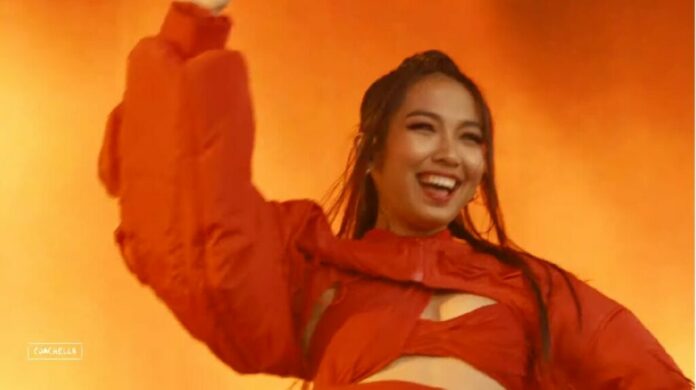 Thai mango and sticky rice has immediately become a hot topic and have been in demand in Thailand since this morning after Thai rapper ‘Milli’, Danupha Khanatheerakul, was seen holding and eating the popular dish on stage while performing at Coachella, California, last night.

Milli, who is also the first and only solo Thai artist who has ever performed at the world’s most famous music festival, took over the stage by rapping on her first song, telling her story as a Thai person and her point of view of living in Thailand.

The most talked-about catchphrase on Thai social media would be lines where she said that “I don’t ride an Elephant” and how Thai people now have BTS sky trains and subways. She also sarcastically mentioned costly Kinnaree electric poles, worth 100,000 baht each, and the public trains that have been in use for 120 years since the reign of King Rama V.

The song went on from what many foreigners recognized Thailand from, such as ping-pong shows, to her expressing opinions about Thailand that “the country is good, people is good, our food is good, but the government is bood (rotten, literally translated).”

Before the end of her performance, Mill ruled the stage by eating a dish of mango sticky rice and telling the story of the famous menu as well as other famous fruits, such as durian, longan, and jackfruit, before leaving with loud applauses and cheering from the audience.

The performance of the 19-year-old artist has been acclaimed by several famous people in the entertainment business as well as political figures, considering it as the primary step of the ‘Soft Power’ for the global recognition of Thailand on the same level as the Thai K-pop singer/rapper Lalisa “Lisa” Manobal of Blackpink.

According to the lawyer, Milli had rudely commented on the government’s management relating to the Covid-19 situation on her Twitter posts, legally considered as committing public insults through advertising.

Milli had reportedly confessed to her actions and was fined 2,000 baht before the case was revoked.