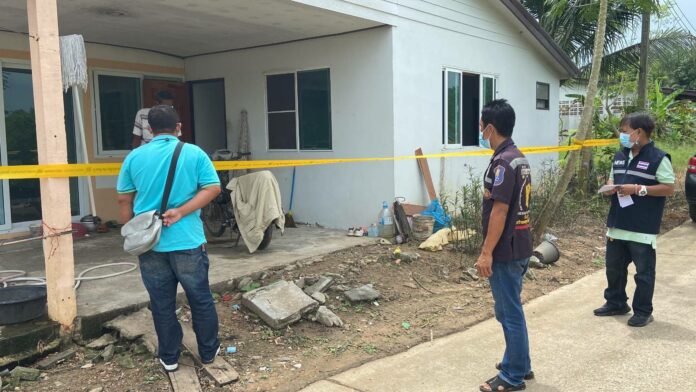 An intoxicated husband has sustained serious injuries after he was reportedly stabbed by his equally intoxicated wife after arguing at a house in the Bor Thong district yesterday afternoon, March 25th, 2022.

The Bor Thong Police was notified of the incident at a house in the Bor Thong sub-district. Police and emergency responders arrived at the scene to find the injured man, Mr. Watcharaphon Rayapsri, 49. He had sustained severe injuries from stab wounds to the left side of his chest and was bleeding heavily. He was taken to a local hospital for urgent medical assistance.

A witness, Mr. Prasit Suipaphon, 55, who said he was a friend of the injured man, told TPN media, “I was drinking alcohol with Mr. Watcharaphona and his wife Mrs. Buakaew Inhom, 59. Mr. Watcharaphon and his wife were arguing but I don’t know what it was about. His wife used a kitchen knife to stab her husband before she ran away. Watcharaphona did not attack her or provoke the physical attack.”

Police are hunting for Mrs. Buakaew to face legal action who remained missing following the incident. At this point, Bor Thong police stated to TPN they believe that preliminary evidence shows that Prasit’s statement was correct.