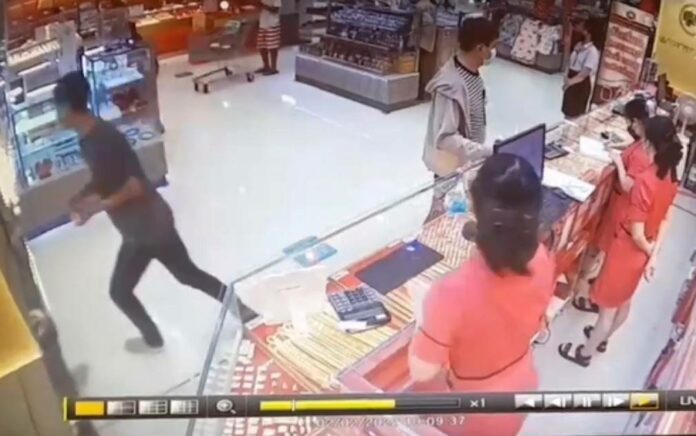 A gold snatcher stole gold items with an estimated worth of more than 200,000 baht from a gold shop in a shopping mall in the Panat Nikhom district yesterday (February 2nd).

The Panat Nikhom Police was notified of the incident at a gold shop in a shopping mall in the Goot-Ngao sub-district. This came just days after a similar incident in Sri Racha that we reported on here at TPN media below.

Law enforcement arrived at the gold shop to find the staffer on duty, Ms. Sunitta Imsuwanruethai, who told Panat Nikhom police, “A thin male suspect wearing a blue shirt, aged around 30- 40, posed as a customer initially and asked to see gold items.”

“After we presented several gold items to him as an example he snatched them which were in total worth about 200,000 baht,” Sunitta explained to reporters.

A witness, Mr. Puwanart Nathungmon, 49, who chased after the suspect, told Panat Nikhom police, “I tried to chase after the suspect to stop him but failed. The suspect sped away on a motorbike parked in front of the shopping mall.”

Police are hunting for the suspect.

Meanwhile a similar story several days before in Si Racha:

A gold shop robber sped away with gold from a pawn shop in Si Racha on January 31st.

Gold robber gets away with 600,000 baht from a pawn shop in Si Racha

A gold shop robber in Si Racha armed with a knife and hammer has been arrested.