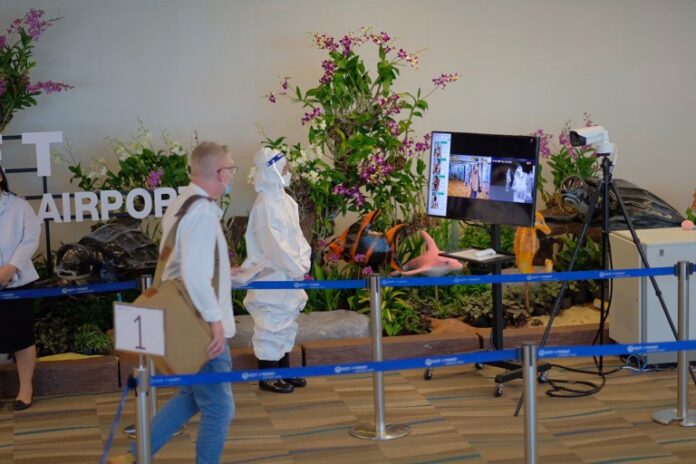 The Thai Tourism and Sports Minister is planning to propose to the CCSA (Center for Covid-19 Situation Administration) the return of the “Test&Go” tourism program as early as this February to attract a year goal of about eight million international arrivals while expecting substantial tourism income.

Minister Phiphat Ratchakitprakarn told the Associated Press today, January 18th, that the Ministry would mention the reimplementation of the previously-canceled tourism plan, possibly in this February, at the general meeting of Center for Covid-19 Situation Administration (CCSA), chaired by the Prime Ministry, in order to revive the tourism and the domestic economy. This meeting is scheduled for this Thursday, January 20th and you can read more about this here.

According to the Minister, the new “Test&Go” plan could proceed under strict guidelines of the Public Health Ministry. Visitors are required to conduct two RT-PCR tests which were on the first and the sixth day of their arrival. Other tight preventive measures to prevent the spread of Covid-19 and possible clusters should be further discussed with the Ministry. Early reports also state that Public Health Minister Anutin Charnvirakul supports the plan but it will be further discussed with the entire CCSA.

Phiphat told reporters: “This matter would be reintroduced at the next CCSA meeting as we saw that the Ministry of Public Health can control the outbreak and the number of daily infections is declining after New Year’s holiday. More than 70 percent of people in the country also received full doses of a Covid-19 vaccination, so there was a potential to consider the use of the “Test&Go.” Moreover, the Tourism and Sports Ministry had estimated that more than 8 million tourists would visit the country in 2022 if the “Test&Go” was reimplemented, which would also generate an income in the billions of baht.

“This number of 8 million tourists excludes Chinese tourists as we don’t know when their government would allow their people to travel outbound again. China is still pursuing a Zero Covid policy so they are not expected to resume international tourism anytime soon. It also excludes tourists from neighboring countries. If included, the number could reach up to 15 million,” Phiphat continued.

Regarding domestic tourism, the target is initially set for 160 million domestic visits from Thai nationals combined throughout the year 2022 after the government has prepared to relaunch several tourism boosting schemes, such as “We Travel Together” this February. It was unclear exactly what was considered a domestic visit, for instance, if a “tourist” went from Chonburi to Bangkok for an afternoon if they would be considered a “tourist”.

It is estimated that these projects should boost about 800 billion baht in tourism revenue combined. If the target is achieved, Thailand’s tourism revenue for the whole year would be expected to be approximately about 1.3 trillion baht, according to Phiphat.

Test and Go, which allows international visitors to enter Thailand, pass a Covid-19 test and wait for the results at a qualified hotel and then travel where they wish, has been suspended since mid-December of last year due to concerns around the Omicron Covid-19 variant. As those concerns relax from Thai doctors, the program is likely to return.

Public Health Minister Anutin Charnvirakul also stated to the press this afternoon, January 18th, that he supported this proposal although some adjustments likely would need to be made. TPN media notes that this is a PROPOSAL and not a guarantee that the program will resume.

Unfortunately for tourists interested in nightlife and partying, Anutin poured cold water on this aspect stating that there were no plans to lift the almost ten-month legal ban on entertainment venues, bars, pubs, karaoke lounges, gogos, strip clubs, and nightclubs as he stressed they continued to be at high risk for spreading Covid-19. The CCSA has allowed these venues to “temporarily convert” to restaurants however have been stifled by many rules and regulations, including a current 9 PM closure in the limited tourism areas (called blue zones) where they are allowed to be open.

These venues were originally proposed to open legally on January 16th after being closed since April of last year, however, the CCSA postponed this with no future date, stating concerns of Covid-19 at these venues.