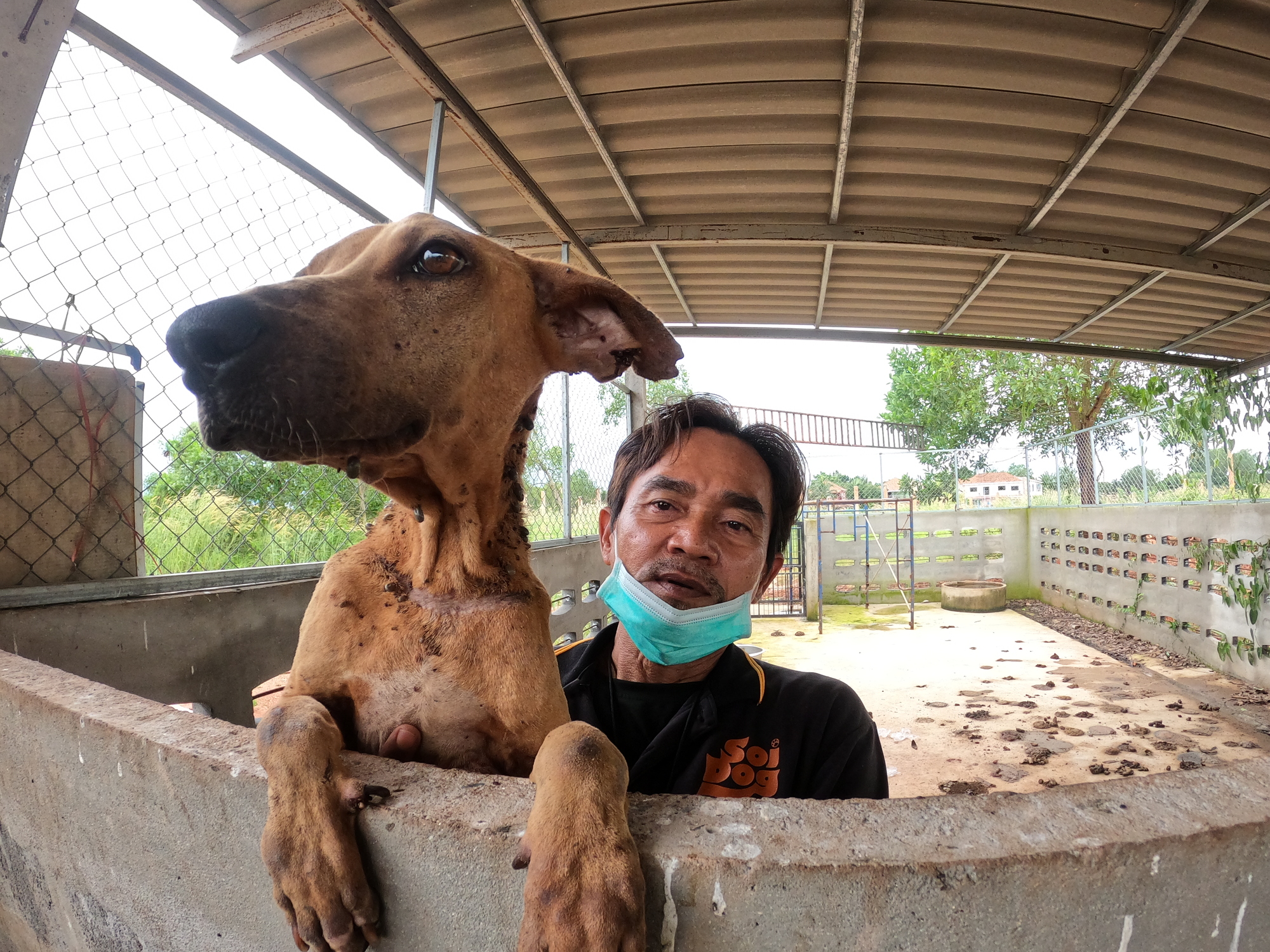 An illegal shelter in Surat Thani has been successfully shut down and 17 street dogs were rescued by Soi Dog Foundation after reports were received of dire conditions and severe neglect.

The shelter was reportedly constructed by a local landowner to contain the dogs who had been living on an area of his land where building works were due to commence. The makeshift facility was poorly maintained, and the dogs were left to suffer for years with little human intervention or care.

Soi Dog staff who went to inspect the shelter described a cramped and filthy space, with feces covering the floor and no food or freshwater available. The dogs were extremely malnourished, infested with ticks and fleas, and suffering from chronic skin infections as well as other medical conditions that had been left untreated.

Arrangements were immediately made for six of the dogs – those in most dire need – to be transported to the Soi Dog shelter in Phuket for urgent treatment. Sadly, one succumbed to illness and passed away on the route. The remaining 11 were transported in the weeks that followed, with plans put in place for their care at the shelter in the interim. They are all now safe at Soi Dog and receiving treatment for a number of different ailments, including canine distemper and tick-borne diseases.

Soi Dog reported the shelter to the Department of Livestock Development’s Animal Welfare Division, and a legal agreement was drawn up stating that it will be permanently shut down and the village’s street dog population managed in a more humane and sustainable manner through CNVR (Catch, Neuter, Vaccinate, Return). In support of this, one of Soi Dog’s nine mobile teams has neutered and vaccinated all dogs in the village and surrounding area.

“These dogs were not problem dogs and showed no aggressive behavior,” explained Soi Dog’s Community Relations Manager Sakdapol Thongjan. “Rounding them up in a cramped space without care is an act of animal cruelty, and a lack of knowledge about how to care for sick or injured animals has caused them to suffer. Infectious diseases can spread in such unsanitary conditions.”

Soi Dog has long warned against the unmanaged sheltering of stray dogs. Just a few months ago, the foundation helped stem an outbreak of canine distemper on Koh Kood which originated at a government shelter and quickly swept the island’s street dog population, killing over 60% of the dogs at the “shelter” and many others across the island.

“In short, sheltering is not a long-term solution,” Sakdapol added.