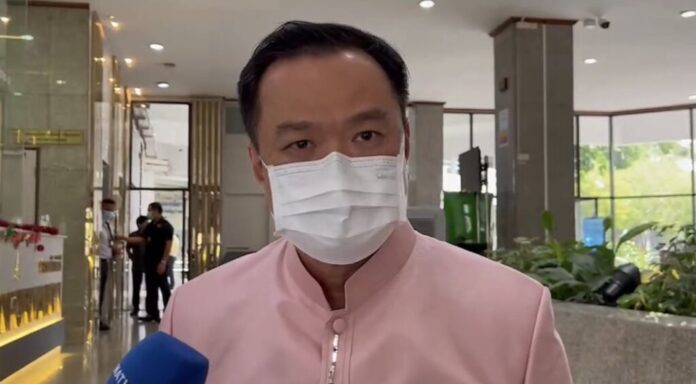 Public Health Minister Anutin Charnvirakul is planning to propose to relevant agencies like the Center for Covid Situation Administration, or CCSA, another postponement of officially allowing entertainment venues to reopen, originally scheduled to be evaluated on January 16th, after recent clusters were reported in venues that violated preventive health measures.

Entertainment venues (like bars, gogos, nightclubs, etc) have been legally, officially closed since roughly early April of 2021 due to Covid-19 measures. They had originally been planned to possibly open in early December, but that was delayed to January 16th for an evaluation by the CCSA. Now, that date is once again in jeopardy, at least according to Anutin.

The Minister stated during the interview regarding the Covid-19 situation after the new year that many clusters were found in “modified” entertainment places because both business operators and customers failed to comply with the government’s health measures. TPN media notes that many entertainment venues have essentially converted into “restaurants” to be able to open in some areas like Pattaya, Bangkok, and Phuket, but many of them have changed in name only, some even without any food whatsoever.

He also expressed that entertainment venues, pubs, bars and karaoke lounges were not fully opened but had only been allowed to be modified as restaurants. But, in fact, most of them operated normally and did not do as the government told them to do, which was to be a proper restaurant in the interim.

Provincial officials must observe and investigate these places. If it is found that they were not doing as issued by the government, legal action must be taken, said Anutin.

When being asked by the Thai press how likely would the consideration of the reopening on January 16th be, the Minister only stated that the government needed to consider this more seriously and thoroughly.

“The Department of Disease Control has to reconsider whether it would be possible to full-scale reopen on January 16th as initially planned because there were no Covid-19 Free Settings at all. The decision would not be made from only one or two cases, it’s from the current Covid-19 situation as a whole,” he added.

Anutin concluded by saying that if it was up to him alone, the venues would not reopen on January 16th, but the proposal will be discussed by the CCSA and other relevant agencies. That being said, although only a proposal, TPN media notes that the CCSA has been very cautious officially where entertainment venues are involved, again having kept them closed for almost all of 2021 legally. Venue owners can only hope 2022 will not be a repeat, as many of them claim they have had little to no financial aid or support for the mandated closures.