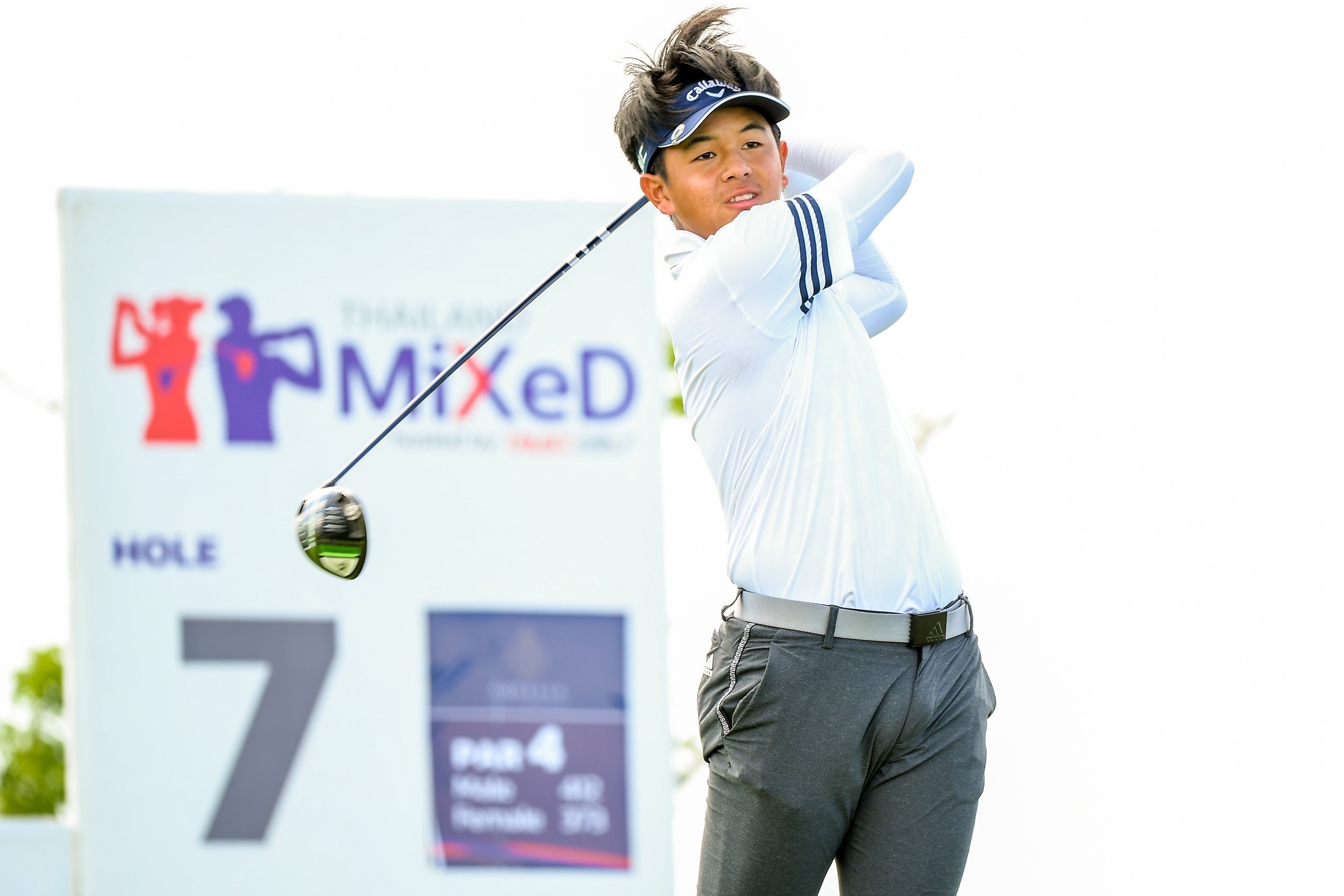 Whiz Kid Ratchanon Chantananuwat relied on sharp ball striking to open his campaign with an immaculate 63 after round one of the Bt5 million The Last Chapter, the fifth circuit of the Thailand Mixed hosted by TrustGolf series,  at the Aquella Golf and Country Club in Phang-Nga on Tuesday.

Teeing off at the back nine, the 14-year-old boy sank seven birdies and one eagle on the first hole to establish a stroke lead over star players like two-time winner Prom Meesawat, LPGA veteran Pornanong Phatlum, and 17-year-old Chanoknan Angurasaranee and rookie Witchayapat Sinsrang at the par 72 landscape which measures 7,018 yards for the men and 6,179 yards for the women.

“I’m not greedy but I should have made more birdies,” said the 14-year-old teen prodigy. “My ball-striking is very good. I hit 17 greens, made birdies from nine holes, and narrowly missed my birdie chances from seven holes,” said the wonder kid who won five straight best amateur titles on the All Thailand Golf Tour (ATGT)  in 2021.

Things could have gone wrong for the talented Ratchanon after he miscalculated a shot that hit the pathway before landing into the pond on the 16th. But he managed to save par and went on to shoot four more birdies plus an eagle chip from the bunker on hole No 1.

“It was a turning point on the 16th. If I ended up with a bogey, I could have lost my momentum and finished with a bad score,” added the world No 651, the youngest in the top 700.

“If I can keep striking the ball like this, I stand a very good chance at winning. I won’t hope for another nine under tomorrow. Just hitting five-under every day will do,” Ratchanon said.

Former world top 30 Pornanong produced four birdies at the front and repeated the same margin at the back to enjoy a bogey-free 64 to follow at second in her first start at the mixed event.

“I putted really well today and the green condition really suits my game. This is my first time playing this format and I’ve got to learn that the guys play quite fast and aggressive. The men’s game is fun to watch,” said Pornanong, three-time runner-up on the LPGA including the 2018 Women’s British Open.

“My game plan for the next three days is to hit the fairways and be prudent with some holes which are quite narrow. But I will go for the flag positions if necessary,” she added.

Prom who won the second Thailand Mixed (with Chapchai Nirat) in Chiang Mai and the fourth in Hua Hin had nine birdies against one bogey on the 18th to also settle for a  first-round 64.

“My shots are getting better than in the previous weeks. I set myself up in several good positions and capitalized on my chances. The course is set up in perfect condition. It’s quite beautiful and new for everyone, so we still have to get used to it more,” said Prom.

Unfancied Witchayapat, 24 from Nakhon Ratchasima, fired an eagle on the first hole, seven birdies, and one bogey to join the leading group.

“My iron shots are sharp. A 64 first round is beyond my expectations. The course condition really favors me,” said Witchayapat who posted two top 10 finishes on the ATGT this year.

The tournament is being staged under strict protective protocols against COVID-19. ATK Swap test is provided for players, personal caddies, player’s company, and officials. Only those who test negative are permitted to participate in the tournament. Furthermore, fans who produce negative ATK results within 72 hours before the tournament are welcome at the course.

Viewers can watch live streaming of the Thailand Mixed hosted by TrustGolf on AISPLAY APP, https://www.facebook.com/trustgolfclub, and at TrustGolf Youtube channel from 9 am onwards during tournament days.

The Thailand Mixed is organized by TrustGolf, an indoor training center with advanced technology, It is supported by the Sports Authority of Thailand, the National Sports Development Fund, the Ministry of Tourism and Sports, Bangkok Bank, B.Grimm Company, Bond Holdings, AISPLAY, Bridgestone, Trust Pharmacy, Trust Live Streaming,  the Center for Covid-19 Situation Administration, Aquella Golf and Country Club and S.Khonkaen.