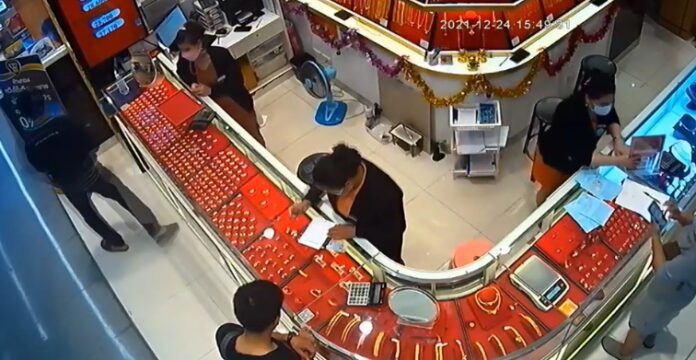 A 31-year-old male Thai suspect has been arrested after allegedly snatching gold items worth more than 100,000 baht from a gold shop at a shopping mall in Mueang Chonburi over the past holiday weekend.

The Don Hualor Police was notified of the incident at a shopping mall in the Don Hualor sub-district. They arrived at the scene to find staffers at the gold shop anxiously waiting for law enforcement. The suspect had been immediately caught by the mall’s security guards and was being physically detained by them awaiting arrival by police.

The suspect was identified by police as Somyod Jaiton, 31. Seized from him was a gold necklace worth more than 120,000 baht.

Somyod reportedly admitted to police, “I have debts worth about 80,000 baht that I had to pay by the end of this month. I had no other options than to attempt to steal to raise the money.”

A gold shop staffer, Mrs. Supitcha Tonjaroen, 35, told TPN media, “The suspect posed as a customer initially and asked to see a gold necklace for his supposed girlfriend. After we presented several choices to him, he snatched one item and tried to flee. I shouted for help before security guards from the mall caught the suspect, physically detaining him, and called the police.”