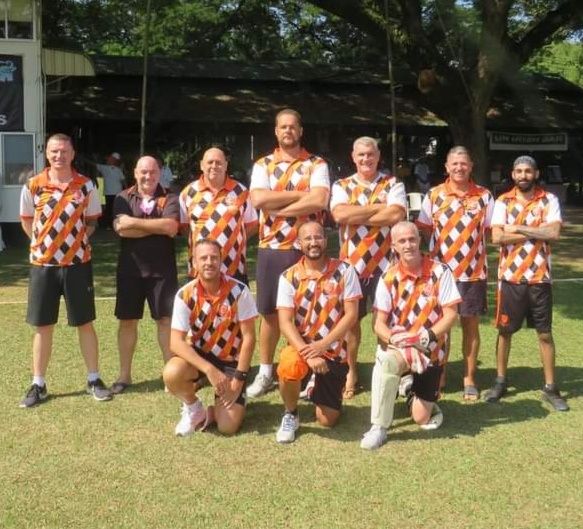 PCC attended this prestigious event on the Thailand Cricket Calendar as runners-up in last year’s tournament and holders of the Chiang Mai 8’s trophy.

There were 11 teams divided into two divisions, The players (including PCC) and The Gentlemen.  All players would bowl one over except the wicketkeeper.  Batmen scoring 31 would retire not out.  Wides and No Balls would count as 3 runs and would not be re-bowled.  4 points would be awarded for a win and there were bonus points for wickets and runs.  A par score was circa 60 runs

The largest and smallest captains faced off in the first match.  Bernie Lamprecht won the toss and asked Lamphun to bat.  Jainish opened to Chanchai, a Thailand international player and consistently the best batsman of the tournament, skied the third ball and was caught by Jainish.  A brilliant start. Habby Singh bowled next and Capt David (Cher) got caught on the boundary by Capt Goliath (Bernie) for a duck. 14 for 2 off 2 overs. Superb. Choo put up stout resistance before being run out by good work from Gary Porter and Habby for 27.  Lamphun could only manage 49 for 3 and a difficult score to defend.

PCC sent in Colin Clark and Luke Stokes to face Cher.  The Lamphun bowlers kept the runs per over below 10 in most cases.  Colin was run out when he slipped twice going for the second run and went for 16. Luke steadied the ship with 13 not out whilst Jainish was caught behind by Ton for 3. Habby struck a winning 4 of his first ball and PCC won by 4 wickets with one ball to spare.  An outstanding start to the competition.

The second game of the day was against Chiang Mai All-Stars who became Tournament Champions, but hardly surprising with so many international and premiership players!! Unsurprisingly, our bowlers suffered as Bernie won the toss and asked CMAS to bat.  Only Habby and Gary managed to earn reasonable figures of 15 and 14 per over respectively, the rest were 24 plus.  It didn’t help when Colin didn’t get to a skier off Luke’s first ball and Habby dropped Abaid off Simon Wetherell’s first ball.  Abaid Ullah, Zia-al-Haq, and Anowar Islam all retired on 31 or more and completed the bruising innings with a total of 108 for 0.

Colin and Luke opened for PCC against Ashan Fonseka.  Colin was bowled for 5 in the first over whilst Luke carried his bat for a subdued 10. Habby went for a Golden Duck to Abaid and it was all looking very grim. Simon was run out for 3 chancing the fielder’s arm – even grimmer.  Danny Evans took the role of run-chaser with a fine 21 not out, but 74 off the last over was beyond his reach, leaving PCC with 44 for 4 and a loss by 64 runs.

A reasonable start for the day with one win and one loss. See the next match report for Day 2.