The first known case of the Covid-19 Omicron variant infection was reportedly found in a U.S. national from Spain who traveled to Thailand last week under the Test & Go scheme, the Ministry of Public Health reported this morning, December 6th.

However, the person reportedly infected, who is asymptomatic, was immediately detected with the virus at their first Covid-19 test upon entry to the country and did not openly freely travel.

Deputy Permanent Secretary Dr. Supakit Sirilak revealed at a morning press conference that the infected traveler went through the first Covid-19 test on November 30th and the result showed positive with Covid-19 on the following day and the compatibility of the Omicron variant was reported up to 99.92%. 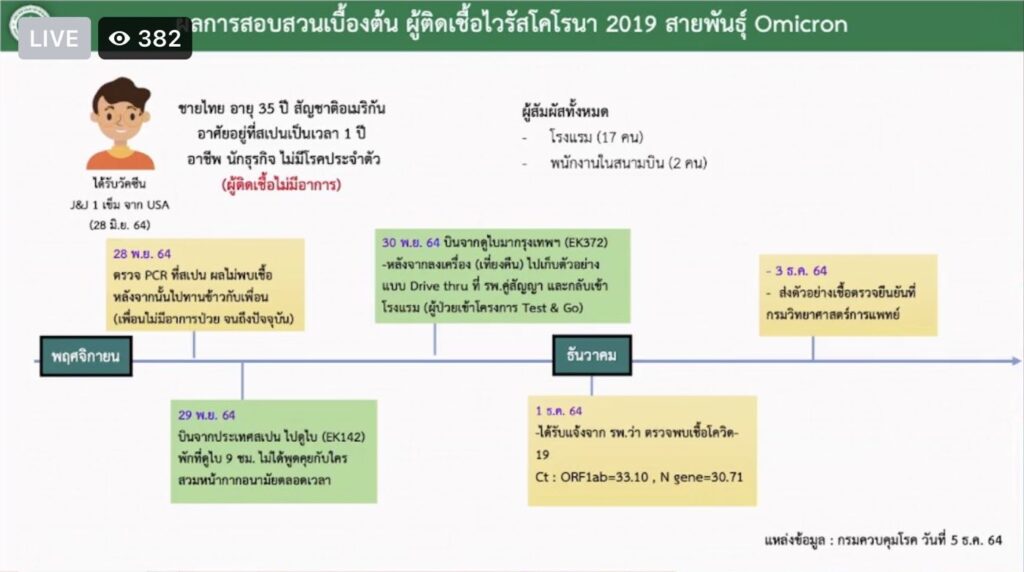 The official disease investigation revealed that the American traveler had proved negative results via PCR test in Spain before having dinner with friends on November 28th. He then flew from Spain to Dubai International Airport on the 29th and spent 9 hours there without contacting anyone and wearing a facial mask at all times.

He arrived at Suvannabhumi International Airport around midnight on November 30th and went through the first PCR test at the hospital counter before staying at the hotel.

The result was proved positive on December 1st and was confirmed with a high indication of Omicron variant on the 3rd by the Department of Medical Sciences.

According to the Department of Disease Control, the patient was asymptomatic and claimed not to have any medical condition. The patient has also reportedly disputed the fact they have been infected with the Covid-19 Coronavirus, as they are not symptomatic.

TPN media notes that the specifics of Omicron are still under investigation although it has concerned epidemiologists primarily due to the number of mutations the virus has. Scientists around the world continue to study the disease to determine the risk of the virus in terms of transmissibility, seriousness, and potential to not be affected by vaccines.