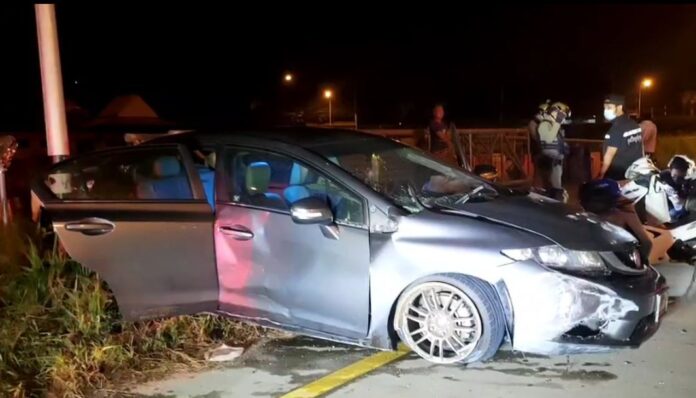 A 27-year-old driver and his female passenger have sustained minor injuries after he crashed his sedan into road barriers in Banglamung early this morning (November 22nd).

Emergency responders were notified of the accident at 2:00 A.M. in Naklua. They and The Pattaya News arrived at the scene to find the damaged sedan on the road.

The driver, Mr. Tanakrit Prabbamroong, 27, and his girlfriend had sustained minor injuries. They were taken to a local hospital at the urging of rescue staff for a checkup.

Mr. Tanakrit told TPN media while being taken to a local hospital, “I was heading home in Chonburi from Rayong. I lost control of my sedan before crashing into the road barriers.”

Banglamung Police did not state if any legal charges would be forthcoming over the accident or if they would be reviewing CCTV.