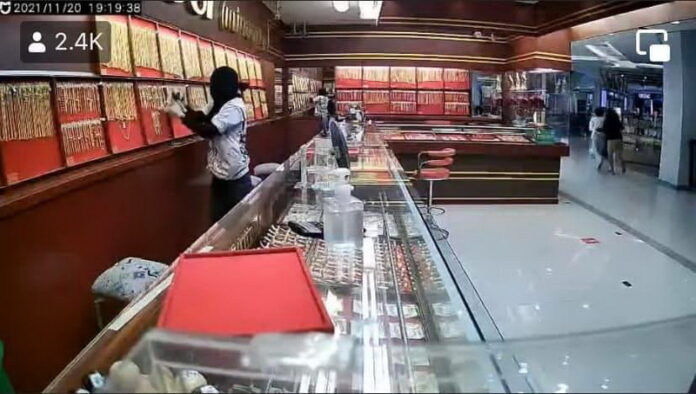 Khon Kaen police announced a 50,000-baht reward for information that leads to the arrest of a man who was reportedly armed and robbed a gold shop at a Khon Kaen department store yesterday evening, November 20th.

As of 7:20 PM. on Saturday, security footage captured an armed man, wearing a white T-shirt that said Why So Serious, jeans, and covering his face with a black hood, approaching the gold shop located on the second floor of Central Plaza Department Store in Mueang Khon Kaen District.

The gunman was seen holding a firearm and pointing it upwards before reportedly firing a single shot, causing customers and employees who were previously preoccupied with sales and hadn’t noticed the suspect to immediately flee the scene in panic. The man then jumped over the counter and snatched pieces of gold jewelry from the shelves before firing another shot to clear his escape route and running off. Nobody was injured during the robbery.

He was captured from another CCTV heading in the direction of the city pillar. The Department Store shortly released a statement that the situation had returned to normal under the police investigation. Police Major General Noppakao Somanat, Commander-in-Chief of the Khon Kaen Provincial Police, told reporters today, November 21st, that a suspect was captured at a local market and taken for interrogation. However, the officials lacked sufficient evidence to identify him as the alleged thief, and the man was released, although DNA samples were taken.

Therefore, the investigation continued with a manhunt for a reward as high as 50,000 baht for those who provide information and leads revealing the suspect to relevant officials.