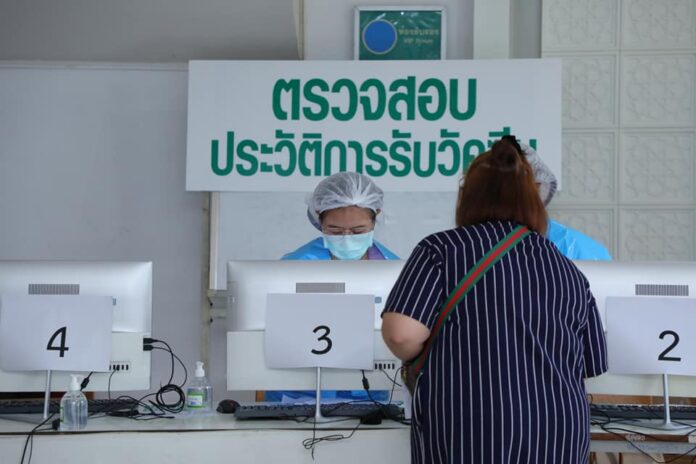 For information about the individual announcements made today, such as bars and nightlife, see after the recap of Covid-19 cases nationally below.

Thailand discovered a total of 7,305 daily Covid-19 infections with 51 additional deaths in the past 24 hours, the Center for Covid-19 Situation Administration (CCSA) reported today, November 12th.

The fatalities were 24 men and 27 women with the most numbers recorded in Bangkok with 5. 49 of them were Thai nationals and one of each was a Filipino and Italian national. The age range was between 39 and 52 years old.

Most of them were reported with underlying health conditions, including hypertension (33), diabetes (21), hyperlipidemia (12), obesity (9), and kidney disease (14). Four of the fatalities were bedridden patients.

Of the new cases, 6,651 were found in hospitals and medical services (which includes contact tracing cases), 323 were from a proactive approach at previously reported clusters, 320 were from prisons, and the remaining 11 were imported cases.

A number of 95,804 patients are still under treatment/isolation/medical care. Of that, 1,824 patients are in critical condition including 423 on ventilators. This is roughly 1.9 percent of cases that are critical while 23.1 percent of that is critical enough for a ventilator.

Regarding the non-prison local infections, the highest numbers of patients were reported in Bangkok with 674, followed by Songkhla with 475, Chiang Mai with 434, Nakhon Sri Thammarat with 376, Pattani with 355, and Chonburi with 249.

As of today, 7,900 people fully recovered in the past 24 hours and have been released from field hospitals and quarantine centers. Thailand has now reached a total of 2,004,274 cases with 1,888,536 recoveries and a total of 19,934 deaths since the start of the pandemic. Dr. Taweesilp Visanuyothin, the CCSA spokesperson, also announced some changes in the color-coded areas and preventive disease measures in the Kingdom.

The highly strict controlled zones, also called the dark-red zones, is reduced from 7 to 6 provinces, including Tak, Nakhon Sri Thammarat, Narathiwas, Pattani, Yala, and Songkhla. Chanthaburi is now listed from a previously dark red zone province to the red zone, which means mandatory overnight curfew will expire here from November 16th. The remaining dark red provinces will have their overnight curfew considered again on November 30th.

Meanwhile, all entertainment venues like bars, nightclubs, karaoke lounges, etc. will remain closed nationally until at least January 15th, 2022. The CCSA meeting would consider the possibility of the business reopening again for January 16th, according to the spokesperson. They did not, however, “guarantee” this as a reopening date. The reason given for the closure is because of concerns about congestion and ventilation. TPN notes that the order didn’t seem to consider different sizes of venues or that many bars would even be outdoors, appearing to only focus on large nightclubs.

The CCSA was also deeply concerned about possible Covid-19 clusters coming from these venues possibly “ruining the holidays” for the majority and causing further closures of other sectors. Thus, they decided to postpone the opening until after the New Year.

It is also unclear if more areas could potentially be given “exemptions” from certain rules or leniency in terms of nightlife, such as Phuket, for the purpose of tourism. The spokesperson did note that if

TPN media notes that there was no specific announcement made about allowing alcohol for dine-in at restaurants in Pattaya, Hua Hin, or other tourist districts like Bangkok or Phuket. The new color-coding chart clearly shows thirteen tourist “districts” with blue dots, such as Pattaya, which in theory would mean relaxed rules but as of press time no announcements had been made and it was unclear if the Governor would do so in the future.

The reaction to the announcement on social media was swift, with almost universal criticism of the delay on entertainment venues originally said to be considered by December 1st. Many comments focused on the importance of the night-time economy to tourism and how by keeping this sector closed over the “high season” it would discourage many visitors and tourists from coming to Thailand.