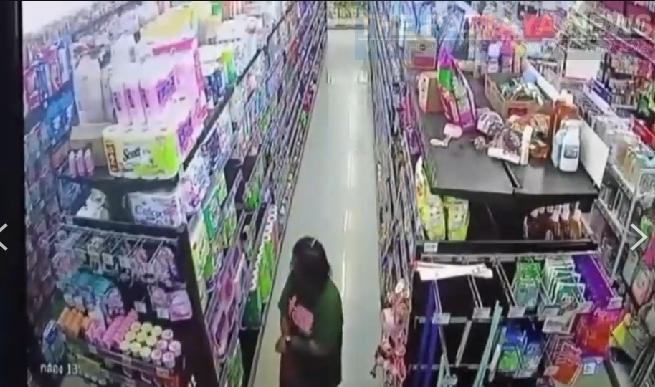 An alleged serial female thief has been caught while she was allegedly stealing food from a convenience store in the Mueang Chonburi district.

The Mueang Chonburi Police were notified of a “citizen’s arrest” of the thief from a staffer at a convenience store in the Nong Ree sub-district.

Police arrived at the store to find the suspect, Ms. Wathinee Somprasert, 30, had already been caught by staffers before police arrived and detained. She was taken to the Mueang Chonburi Police Station.

A convenience store staffer, Ms. Phontipa Poekam, 33, told police, “The suspect was caught on CCTV camera while she was putting items from a shelf into her bag.”

“She had stolen from the store twice this week. We checked CCTV footage while she was at the store. She was found stealing pork, vegetables, bread, and snacks. We called police and caught her.”

Police said they have received many reports from nearby convenience stores that the same suspect had stolen from them with CCTV footage evidence over the past several weeks and believed the suspect was a serial thief. They stated they would be interviewing the woman at the station to determine if any charges would be placed or if the woman possibly had a mental illness or was homeless and needed assistance.

Mueang Chonburi police noted that many temples and food charities were running in the Chonburi area for those in need and, according to them, there was no excuse to steal from local businesses and stores.