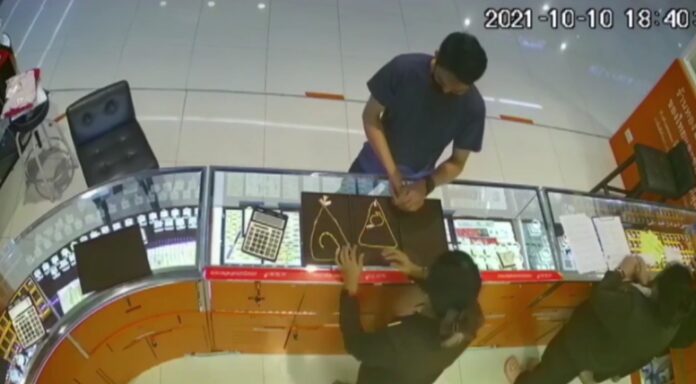 A forgetful suspect dropped his mobile phone while he was running away after he allegedly snatched gold items worth almost 200,000 baht from a gold shop at a shopping mall in the Don Hualor sub-district.

The Don Hualor Police was notified of the incident at 7:30 P.M. on Sunday, October 10th at a gold shop in a shopping mall.

They arrived at the scene to find several distraught staffers at the gold shop. They handed over the mobile phone that was reportedly dropped by the main suspect to Don Hualor police.

“After we presented several choices to him, he snatched two items which were in total worth about 196,000 baht before speeding away. However, in his rush to escape the mall, he dropped his mobile phone by accident which we gave to police to hopefully track him down.” Tatdoi stated to the police.

Don Hualor police informed the associated press as of today, October 12th, 2021, that they have successfully identified and tracked down the main suspect and were preparing to arrest them if they did not surrender. They declined to name the suspect to the press, citing the ongoing investigation. TPN media will provide any further updates to this story if they become available.