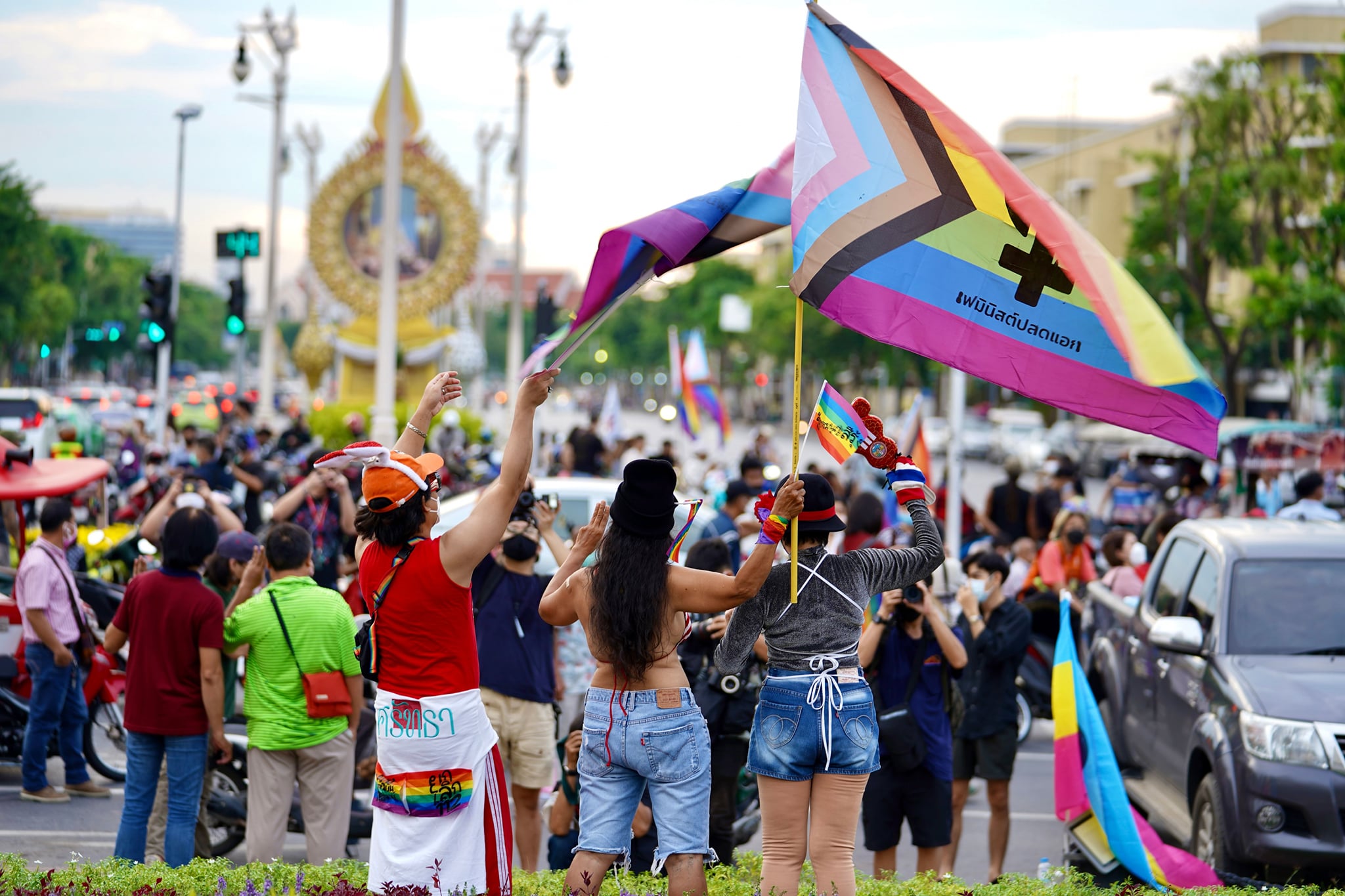 A pro-democracy demonstration and car protest, led by feminist liberation group “Feminist Plod Ake”, was staged in Bangkok yesterday afternoon, October 9th, to demand the resignation of the Prime Minister and to promote social and gender equality in Thailand.

The group began gathering at 2:00 PM. near Silom of Soi 2, which is also known as a home to gay clubs and communities in the capital, before organizing performances and a car protest heading to the Democracy Monument. 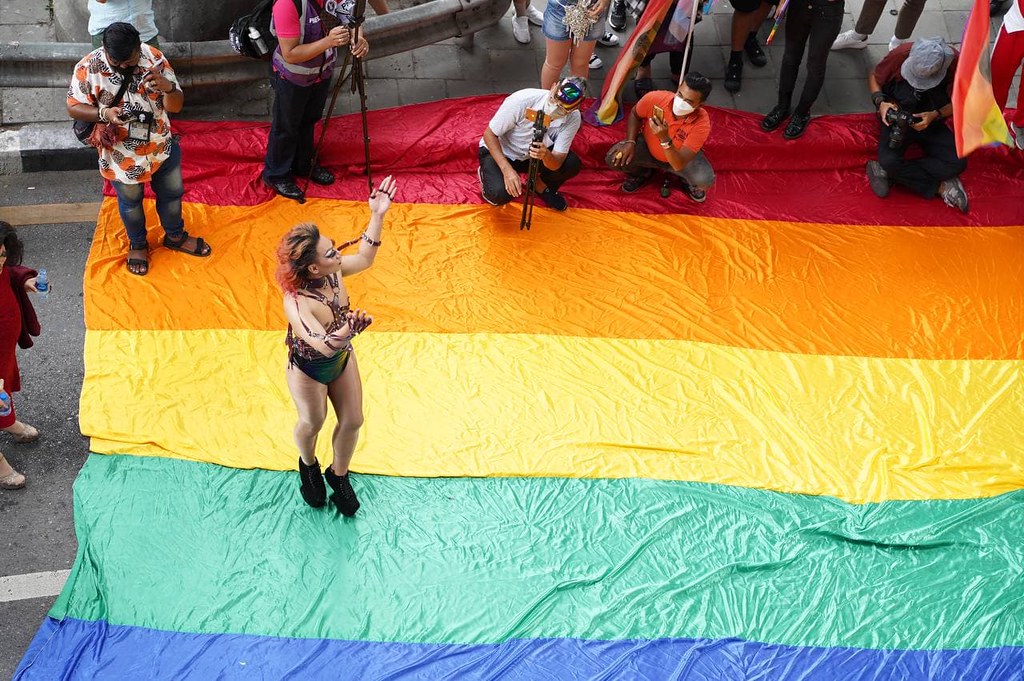 Apart from the three similar pro-democracy demands, the feminist group also called for sanitary napkin welfare, equal marriage, revocation of Section 112, and the reform of the patriarchal constitution.

The group arrived at Ratchadamnoen Avenue at around 4:00 PM. when they began to wrap the symbolic monument and decorate the area with the LGBTQ+ rainbow flag.

Political speeches, symbolic performances, and live music were performed throughout the afternoon at the site to express what they claimed to be the failed management of the current government and to support all aspects of equality in Thai society. 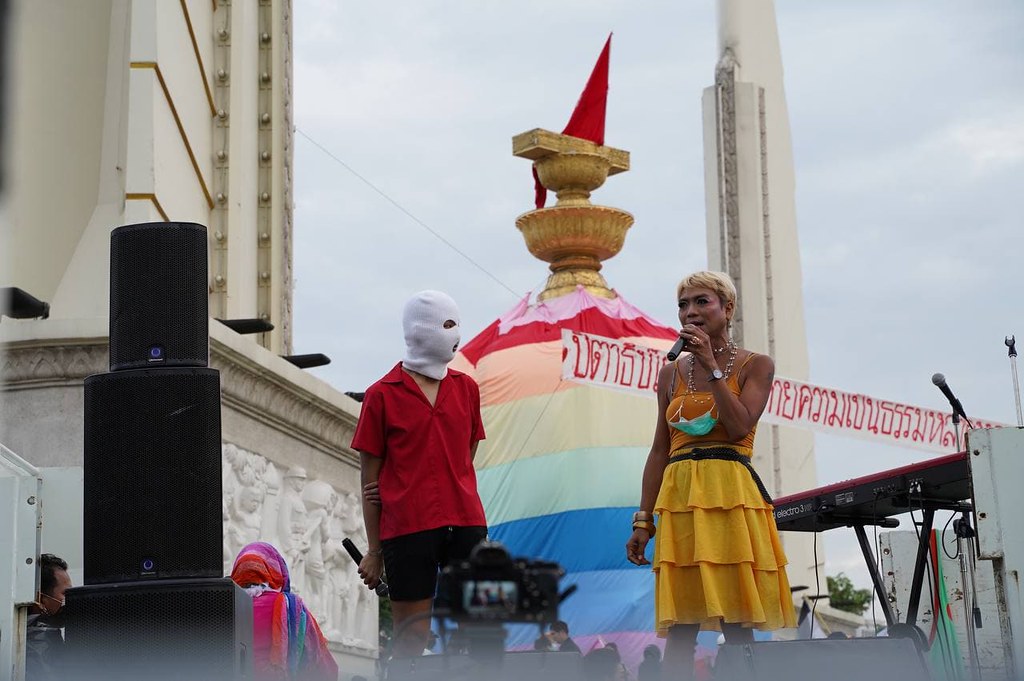 The gathering was immediately called off as of 7:10 PM. in the middle of a speech as a clash between crowd control police and a group of independent hardline protesters at Phan Fa Lilat Bridge took place nearby with reported use of tear gas and rubber bullets. Feminist Plod Ake denied any connection to the independent protesters who appeared to want to directly engage police through non-peaceful means according to witnesses at the scene.

The independent protesters reportedly responded with firecrackers and burned a tire at the intersection before moving back. The police warned them of such actions as they were allegedly violating the Emergency Decree and the Communicable Disease Act. A high-pressure water cannon truck was deployed to extinguish the burning tire and to potentially deter further non-peaceful protests.

About 7 people were reportedly arrested and taken to the Bang Rak Police Station around 8:20 PM. They had their history recorded but did not have any charges filed before being released at around midnight.