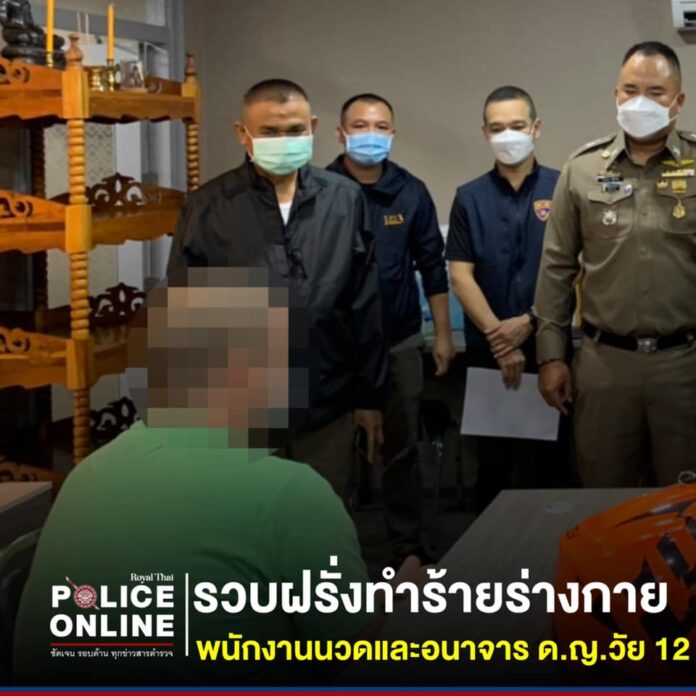 A 37-year-old American man who allegedly raped a female massage therapist and attempted to sexually abuse a 12-year-old girl in Khon Kaen has been arrested in Bangkok, according to the Royal Thai Police.

Major General Damronsak Kittiprapat, the Deputy Commander of the Royal Thai Police, told the press earlier today, October 2nd, 2021, “On September 27th A 37-year-old American man had been accused of attacking and raping a 45-year-old female massage therapist at a massage shop, leaving her bloodied and beaten, in Khon Kaen City before speeding away on a red sports-style motorbike.”

“Shortly after the incident at the massage shop around 1:00 P.M., he attempted to commit sexual abuse to a 12-year-old girl (Some reports from Thai media have stated the victim was 13) who was helping her parents sell honey at a roadside stall on Mittraphap Road in Ban Pai during the daytime. He stopped his motorbike, which had no license plates, and assaulted the girl, exposing himself to her. The shocking incident was stopped by a passing oil tank driver as the girl’s parents were not immediately present. The oil truck driver beeped his horn several times, stopped his vehicle, and stepped out to attempt to forcefully stop the suspect, but the suspect fled on his motorbike. Following this incident and both police reports filed by the victims, we began to track down the foreign suspect, who showed no respect for Thai law or others.” Major General Damronsak stated.

“We continued our investigation utilizing CCTV, data from the Royal Thai Immigration department, and tips from the public to identify and track down the foreign suspect. As of this morning, we arrested the prime suspect Mr. Robert A., 37, an American national, at a condominium in Soi Na Na on Sukhumvit Road in Bangkok.” Major General Damronsak continued.

“Seized at Mr. Robert’s residence was the motorbike allegedly used at the scene of the crime as well as the clothes and very prominent orange and black motorbike helmet he appeared to be wearing on that day, according to CCTV footage.” Major General Damronsak added.

“Mr. Robert has admitted to the Royal Thai Police all the allegations against him. He claimed that he took illegal drugs, speed, that led him to commit his actions, stating that he was not in the right state of mind.” Major General Damronsak said.

“Mr. Robert is facing charges of bodily harm causing serious injury, rape, and sexual abuse as well as forcefully detaining someone against their will. He remains in custody at this time.” Major General Damronsak added.

According to Royal Thai Immigration, the suspect had entered Thailand back in January and applied for a long-term visa in Samui. He had most recently been staying in Amnat Charoen before being arrested in Bangkok, reportedly with a girlfriend.  The girlfriend, whose name was withheld by law enforcement, reportedly stated that the suspect had been absent on September 27th and then returned to Amnat Charoen. However, he left Amnat Charoen on September 29th, stressing that he had “things to do” and did not return, likely attempting to flee from potential law enforcement. His place of residence, however, according to Immigration, was in Bangkok which is where he was ultimately arrested.

The Royal Thai Police stated that the suspect will be sent back to Khon Kaen, where the allegations took place, for legal proceedings.