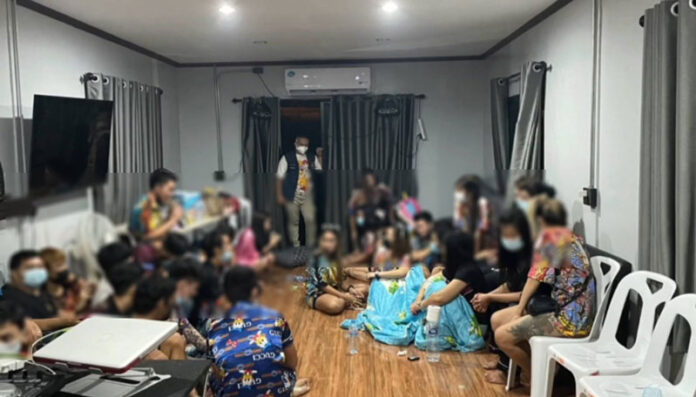 A group of 39 Thai teenagers were arrested at a pool villa in Rayong province this afternoon, September 26th, after reportedly gathering and taking illegal drugs to celebrate being released from a Covid-19 quarantine.

Officials from the Klaeng Police Station arrived at the two-story villa located in the middle of a durian plantation in the Klaeng district after being alerted of alleged drug abuse among youngsters from an anonymous tip. The group was seen dancing in the house with loud music playing when the police approached the scene.

A total of 21 men and 18 women who failed to escape the scene were arrested with drugs found on the floor, including 57 tablets of Ecstasy and 51.56 grams of Ketamine. Alcohol was also found at the scene, which as most of those arrested were under the legal age of twenty was also illegal. All of them were taken to Klaeng Police Station for questioning. Klaeng police believe at least a handful of party-goers may have managed to escape and officers are looking for these individuals.

The group reportedly confessed to an illegal gathering and drug abuse during the investigation, further stating that most of them knew each other while being quarantined at the Chan Khem Covid-19 detention facility in Chanthaburi province. They planned to organize a drug party at the villa in Rayong as it was convenient for everyone who originally traveled from Chonburi, Rayong, and Chanthaburi.

Police Major General Weerawat Chulanan of Klaeng Rayong Police Station said that 37 of the arrests were found to have taken drugs but all of them did not test positive for Covid-19 after taking a rapid antigen test as they had all just been released from a fourteen-day quarantine.

Initially, they were charged for possession of narcotics categories 1 (Ecstasy) and 2 (Ketamine) for illegal sale and use as well as illegal gathering, violating the Emergency Decree and the Communicable Diseases Act. Under current Covid-19 related rules, any “parties” or social gatherings for festive occasions, especially around alcohol, are against the law. Thai police have been cracking down hard on parties over the past week, stressing that they are still against current Covid-19 orders and could spread the disease.