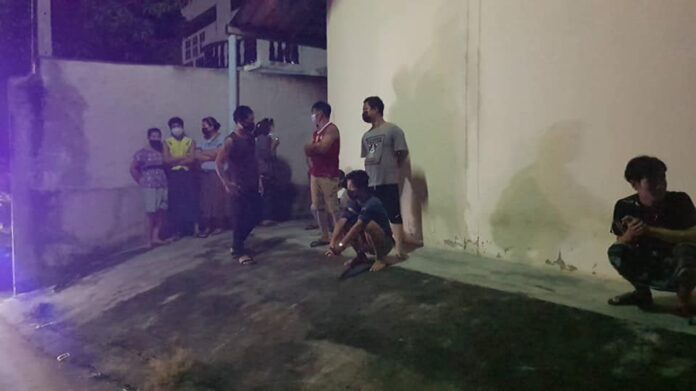 An intoxicated Myanmar man has sustained serious injuries after he was reportedly stabbed in the neck by an unidentified suspect who fled the scene of the incident.

The Mueang Chonburi Police were notified of the incident on Sunday (September 19th) around midnight at a rental room in Nong Ree.

Emergency responders arrived at the scene to find the injured party Mr. Poe Tu Tae, a Myanmar national who works at an industrial company nearby. He was bleeding heavily from a neck wound.

Poe had sustained serious injuries from being stabbed in the neck by a sharp object about three times, according to Mueang Chonburi Police. He was rushed to a local hospital for urgent medical assistance.

On the ground, in front of Mr. Poe’s rental room, Mueang Chonburi police stated to the press that they found many bottles of alcohol and beer.

A Myanmar national who witnessed the event and spoke with police stated that they work at the same company, although declined to give his name. They were drinking alcohol on their day off and had been drinking for the entire day when the incident took place, according to the witness. The victim had reportedly entered into an argument with several other men, one of whom later stabbed him with a sharp object. The nature of the argument was not revealed by the Mueang Chonburi police.

Mueang Chonburi police stated they are looking for the suspects, although also noted that currently in Chonburi drinking alcohol in groups of more than one person is against Covid-19 rules.