A man who was going to apply for a job has been pronounced dead at the scene after he collided his motorbike with a trailer truck in Si Racha over the past weekend.

The Laem Chabang Police were notified of the accident at 12:30 P.M. on Saturday (September 18th) at the Klang Thung Intersection in Thung Sukhala.

Emergency responders and The Pattaya News arrived at the scene to find the trailer truck on the road. The driver, Mr. Tanaphon Nummaneem, 44, was on the scene waiting for law enforcement officers.

Nearby, police found a damaged motorbike and the body of Mr. Amnouy Yothawong, 33. 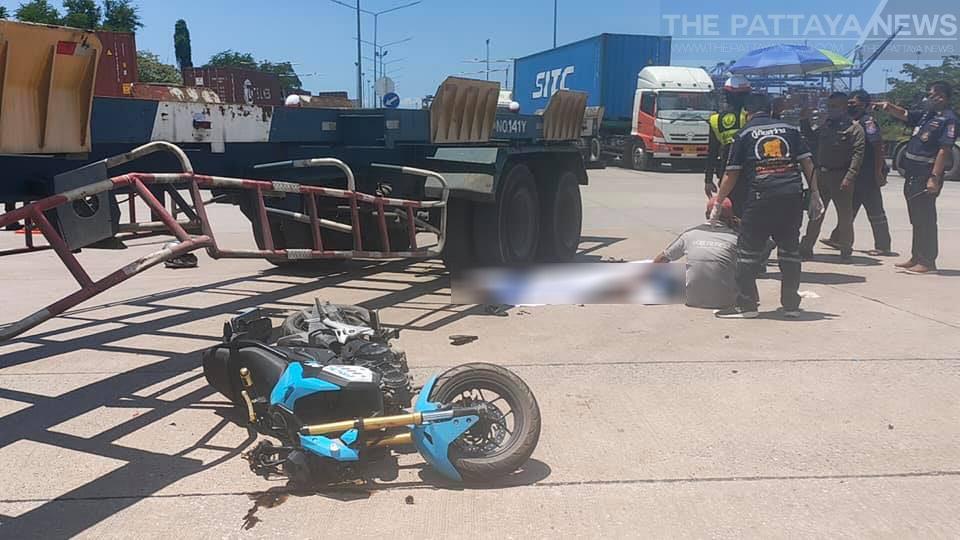 Amnouy’s friend, Mr. Thongchai Thammaro, 41, who arrived at the scene shortly after the accident took place, was heavily emotional due to the tragic situation and told TPN reporters, “Mr. Amnouy was my best friend. He was going to apply for a job as a trailer truck driver at the port in Laem Chabang. He was literally on his way to a job interview.”

“He had just bought a house two months ago. He will leave behind his four-year-old child.” Thongchai added.

Meanwhile, Tanaphon stated to reporters, “I was about to cross an intersection. I made sure there were no vehicles before I crossed. Halfway through the intersection, however, Mr. Amnouy crashed into the side of my truck at high speed.”

Police are checking CCTV footage nearby to determine the exact sequence of events in the accident.