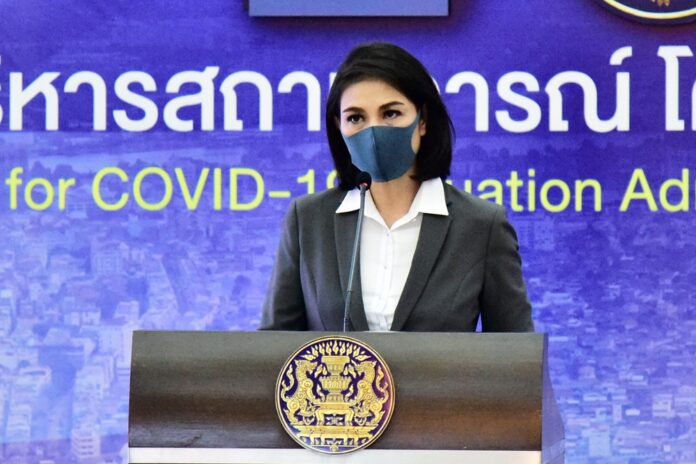 The assistant spokesperson said that the CCSA had acknowledged the proposal to reopen pilot areas and welcome vaccinated tourists in Bangkok and other provinces, including Chonburi and Pattaya, by mid-October, following the discussion among the Bangkok Metropolitan Administration and the Ministry of Tourism and Sports on Wednesday.

However, the matter is not yet considered and approved by the CCSA, the Public Health Ministry, and the Cabinet Committee. It must be discussed with the relevant departments and must be initially presented through the Ministry of Public Health in order to have a careful and strict examination of the measures as Bangkok, in particular, is a large area and need to be thoroughly considered in detail.

“The consideration will require a self-assessment of the area by the public health government agencies and the private sectors whether the area is ready to be designated for the Sandbox. The health care system must be ready in advance if a concerning number of infections is found,” Dr. Apisamai stated.

As of today, Bangkok Governor Aswin Kwanmuang also rejected the Bangkok Sandbox scheme as less than 70 percent of the capital’s population are fully vaccinated.

However, according to the governor, the reopening plan will not be implemented anytime soon as the authorities are now focusing more on vaccine acceleration as well as the current spread of Covid-19 Coronavirus in the area. He stressed he was not “dismissing the plan forever and that he understood the pain of business owners” but would re-evaluate it every few weeks based on where Bangkok stood.

As for Chonburi, Cha-am, Hua Hin, and Chiang Mai the proposal to reopen these areas will be discussed further by the CCSA and relevant agencies in the “near future” but a final decision may not come until a major meeting scheduled for the end of the month, which would also address restrictions overall, zoning codes for provinces, and a curfew in dark-red zones. For now, however, the Tourism Authority of Thailand and these areas support the proposal to move forward in October, with Chonburi (Pattaya) in particular saying they will be ready to open if given permission, next month.

Koh Samui is also under consideration to become a Sandbox, similar to Phuket, and get rid of the current unpopular sealed routes “Samui Plus” program which essentially ties tourists to a resort and selected tours of limited attractions. This will require further deliberation and final decisions from the CCSA as well.

The CCSA asking for more time to evaluate the proposals, despite the eagerness of the Tourism Authority of Thailand, should not surprise many people as over the past several days’ prominent medical advisors with the CCSA have warned against the plan of reopening, stressing they feel it is too early to do so.

For further information on the proposal click here. Keep in mind, it is only a proposal and needs many levels of approval. The CCSA did not give a specific, firm date on when they would come to a final decision on the proposals for reopening.