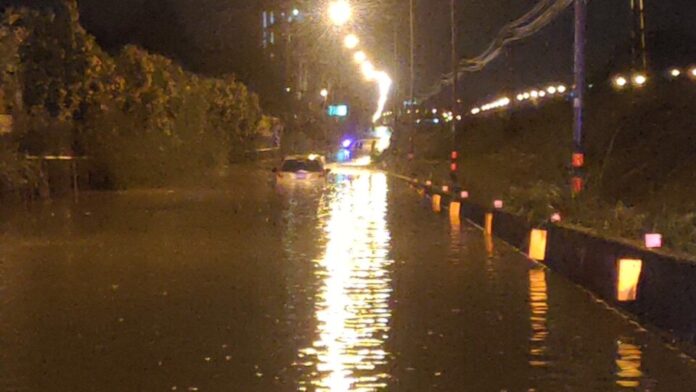 As heavy evening rainstorms take place as of press time tonight, September 7th, 2021, several days of torrential rain and the potential of flash flooding are forecast to take place according to the Thai Meteorological Department (TMD).

Eastern provinces in our reader-base, such as Trat and Chanthaburi are under flash-flood watches. Rayong and Chonburi are under warnings for torrential rainfall.

This is due to several factors, in the exact words of the TMD:

“The monsoon trough lies across the Central, the East, and the lower Northeast into the low-pressure cell in the South China Sea. Meanwhile, the southwest monsoon prevails across the Andaman Sea, Thailand, and the Gulf of Thailand. Continuous rainfalls, as well as heavy rains, are forecast over the country, while very heavy rains are possible for the lower Northeast, the Central, and the East regions. People in the risky areas of upper Thailand should watch for overflows and flash floods.”

As of 10:30 P.M. this evening, September 7th, heavy rains had been falling in the Pattaya area for roughly two hours and reports of sporadic flooding were coming in from reporters in the Banglamung area. However, due to a mandatory Covid-19 curfew from 9:00 P.M. to 4:00 A.M., there is limited to no traffic in the area currently.

TPN media will continue to observe this inclement weather over the next several days and readers are advised to be aware of low-lying areas and the potential of flooding.

Photo is a stock photo from a prior storm on the railway road in Pattaya by the TPN media team.