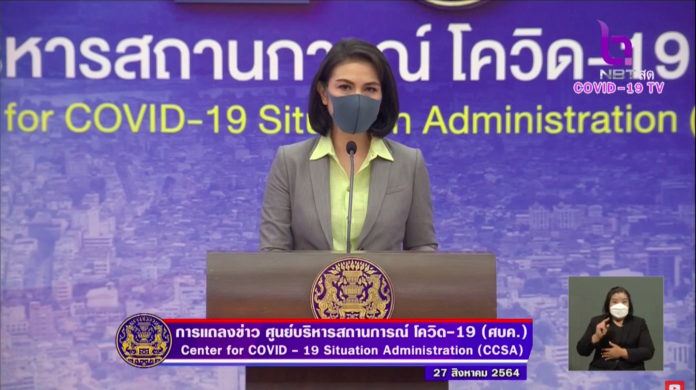 The assistant spokesperson for the Center for Covid-19 Situation Administration, or CCSA, was specifically asked by reporters yesterday afternoon, September 1st, 2021, about entertainment at recently opened restaurants.

Restaurants had been allowed to open for dine-in in 29 maximum controlled provinces for the first time in about a month and a half. However, many rules remained, such as a ban on drinking alcohol at restaurants.

The spokesperson was asked by a reporter from the Bangkok press pool if live music or shows were allowed at restaurants in “dark red zones” which include Chonburi, pointing out that markets like Bangkok and Pattaya were amongst the most important for musicians who had been out of work essentially for months, many of them since April 10th. Although bars, lounges, concerts, and nightclubs remained closed nationwide and have since April, many musicians and entertainers have asked if they could be allowed to work at certain restaurants that would have live music if they were kept separate from the diners and followed Covid-19 precautions.

Unfortunately, Dr. Apisamai Srirangsan, the assistant spokeswoman of the CCSA, poured cold water on this idea. She stated that the CCSA fully understood and sympathized with the suffering of artists and entertainers, but that at this time they were concerned about people spending too much time at a venue. She stated that the CCSA felt that if there is music or a show people will spend a longer time at a restaurant, potentially leading to the spread of Covid-19. She also expressed concern about adding more people into the environment in terms of the band or performers and of people being tempted to dance or mingle if there was live entertainment.

Therefore, at this time, no sort of shows, concerts, events, bands, singers, performances, traditional Thai dancing, DJs, emcees, or similar activities can take place at restaurants according to Dr. Apisamai.

She did, however, state that the CCSA would be continually reviewing the restrictions and Covid-19 situation in the country and that further easing would come as the situation improved. She asked for those in this sector to please be patient and that the CCSA had not forgotten about them.