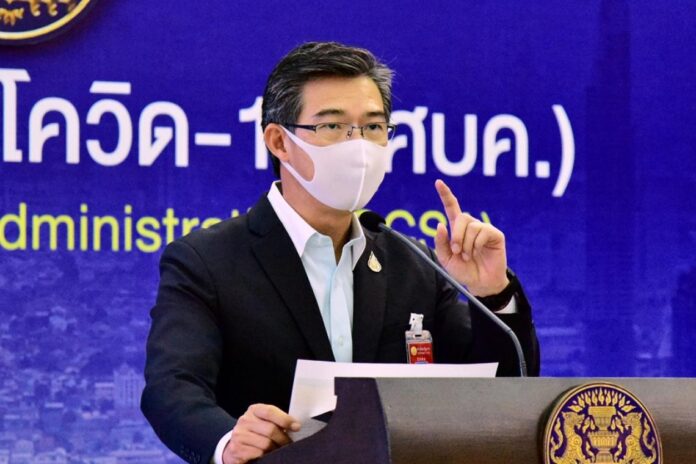 The reopening of businesses and other easing restrictions in dark-red zone provinces are part of the new measures in order to live with the disease under the maximum self-protection principles, CCSA spokesperson Taweeslip Visanuyothin said today, August 30th.

The spokesperson clarified that the return of business operations is not the lifting of lockdown restrictions but is rather the implementation of newly arranged measures called “Smart Control and Living with COVID-19”, which had been already applied in many countries in the world in order to coexist with the disease. He stressed that the rules were not being “unlocked” or “relaxed based on case numbers” but are part of the long-term living with Covid-19 strategic plan.

The spokesperson did not mention the enforcement of the previously announced “Universal Prevention pilot program”, which states that all establishment staff and customers in “high-risk” venues like restaurants are to be fully vaccinated against Covid-19, take a negative test within 72 hours, or recovered from Covid-19 within 3 months. This was stated to be a trial/pilot in dark red provinces but not “mandated” at this time due to lack of supply of rapid antigen test kits and only roughly 10% of the population fully vaccinated overall. Future enforcement, however, is possible after the trial period and has supplies and vaccinated percentages of the population increase, according to the spokesperson.

“The public who would use any services must realize and comply with the personal “Universal Prevention” and strict self-protection at all times. The CCSA would review the results of the order for 14 days and would revise the implementation again later,” said Dr. Thaweesilp.

Additionally, Bangkok governor Aswin Kwanmuang said people are allowed to visit reopening places without having to carry documents proving vaccination status and are highly advised to stay cautious and protect themselves to the fullest under the new measures.

The so-called “new normal” measures announced in the Royal Gazette primarily include the reopening of dine-in restaurants and other establishments such as beauty institutions, salons, massage parlors, etc., starting this Wednesday, September 1st. The order did not include mention of the controversial vaccination rules discussed above which were widely panned by the restaurant industry and potential customers.

TPN media notes, however, that the Universal Prevention measures that include vaccination and testing requirements remain a pilot program with the CCSA stating that it could, potentially, down the road become policy and mandated and that people should ensure they are taking every opportunity to get vaccinated and protect themselves. Owners of businesses like restaurants should be encouraging all their staff to get vaccinated as well as regular testing.

The full restrictions can be found in the previous article below: