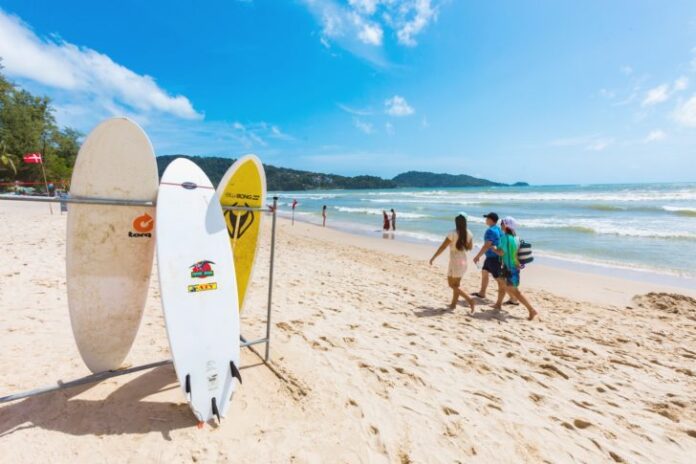 The following is an opinion. The thoughts and statements in this article are the author’s own and may not reflect those of the entire Pattaya News Company Limited.

Nobody can deny currently that things are tough here in Thailand.

It’s almost a perfect storm-daily protests, 29 areas/provinces under partial lockdown measures that have shuttered tens of thousands of businesses and put an estimated three million people out of work according to the Thai Chamber of Commerce (and likely much, much higher if you count the informal sector), a vaccination program not moving as fast as people would like, continued pressure on the government from multiple sectors and conflicting goals, and much more.

That being said, contrary to some belief, one fairly successful metric cannot be ignored and that is in the Sandbox program in Phuket, the current program that allows vaccinated foreign visitors to enter the country without quarantine and roam the island but with a set of rules, paperwork, and tests. That metric I am referring to is the risk that foreign vaccinated tourists present in terms of having and spreading Covid-19. We will get to that in a moment.

The Sandbox program even recently fairly quietly expanded, allowing foreign vaccinated tourists to travel to other islands after seven days and two negative Covid-19 tests. This shows that officials have confidence in the Sandbox program, mainly due to what the data shows so far, again, we will get to that momentarily.

A lot of the comments on social media about the Sandbox are negative, and I certainly understand why someone would feel that way. It certainly isn’t 2019 era travel and the amount of paperwork and steps to take, as well as Covid-19 tests, is fairly intimidating, especially to the average traveler. The tragic murder of a foreign tourist that was taking part in the program was a huge black mark. There continue to be a decent number of local Covid-19 cases in the Sandbox, although it is very important to note the vast majority are from local residents or people who went to the island domestically, and not Sandbox tourists.

These cases have led to rules being tightened on the island, including an unpopular ban on alcohol at restaurants (officially, anyway) and strict domestic travel rules that basically put the island off-limits for anyone wanting to travel there internally.

So, what is that about a positive metric I mentioned? Well, contrary to some belief, the Sandbox was NEVER meant to bring in tens of thousands of tourists like prior to Covid-19. In fact, the rules were so strict specifically to discourage legions of tourists from returning. This is partially why bars and nightclubs and entertainment remain closed as well, as Thailand doesn’t seem to want that type of visitor at this time, despite Phuket being well over 70% vaccinated and all tourists entering vaccinated. And yes, most visitors are not tourists but are ex-pats or what we call in America “snowbirds” who come in for three to six months at a time. Many of them are also Thai people returning from overseas.

That’s fine. They all contribute to the economy in some way and serve the purpose of testing the risk of letting in foreign-vaccinated tourists without quarantine. It’s also important to note that most (of course, not all) people who have actually participated in the Sandbox have given fairly positive feedback as you can see in this major Facebook group. P.S. It is also a great place to learn more about the program from those who actually have gone through it and not random negative comments online.

So, what was/is the point of the Sandbox? Simple, to measure the risk of letting in foreign vaccinated tourists without quarantine. I’m not going to get into a debate on vaccinated or unvaccinated in this article or the Delta variant, transmissibility, viral load, or anything like that. I am simply going to state the following-Thailand wanted to see what the risk level was of letting in vaccinated foreign tourists without quarantine. Should Thailand reduce quarantine for unvaccinated who pass negative tests as well? That’s a whole different topic and article and I’m not going to get into that here. It’s worth noting though that currently they go through a fourteen-day hotel quarantine under very strict rules, despite the number of cases of Covid-19 in Thailand.

As for vaccinated foreign tourists without a strict quarantine in Phuket, that particular test appears to have gone very well. No, it’s not perfect. Yes, there have been cases. However, they knew they would have cases, and quite frankly with the situation in Thailand currently with still over 20,000 cases a day (although importantly recoveries are starting to outpace new cases and vaccination speed has accelerated) the level of precaution to let in visitors is, by nearly every standard, overly cautious.

Let’s dig in for a moment. The chart below is the most recent Phuket Sandbox Daily Report, as of August 19th, 2021. 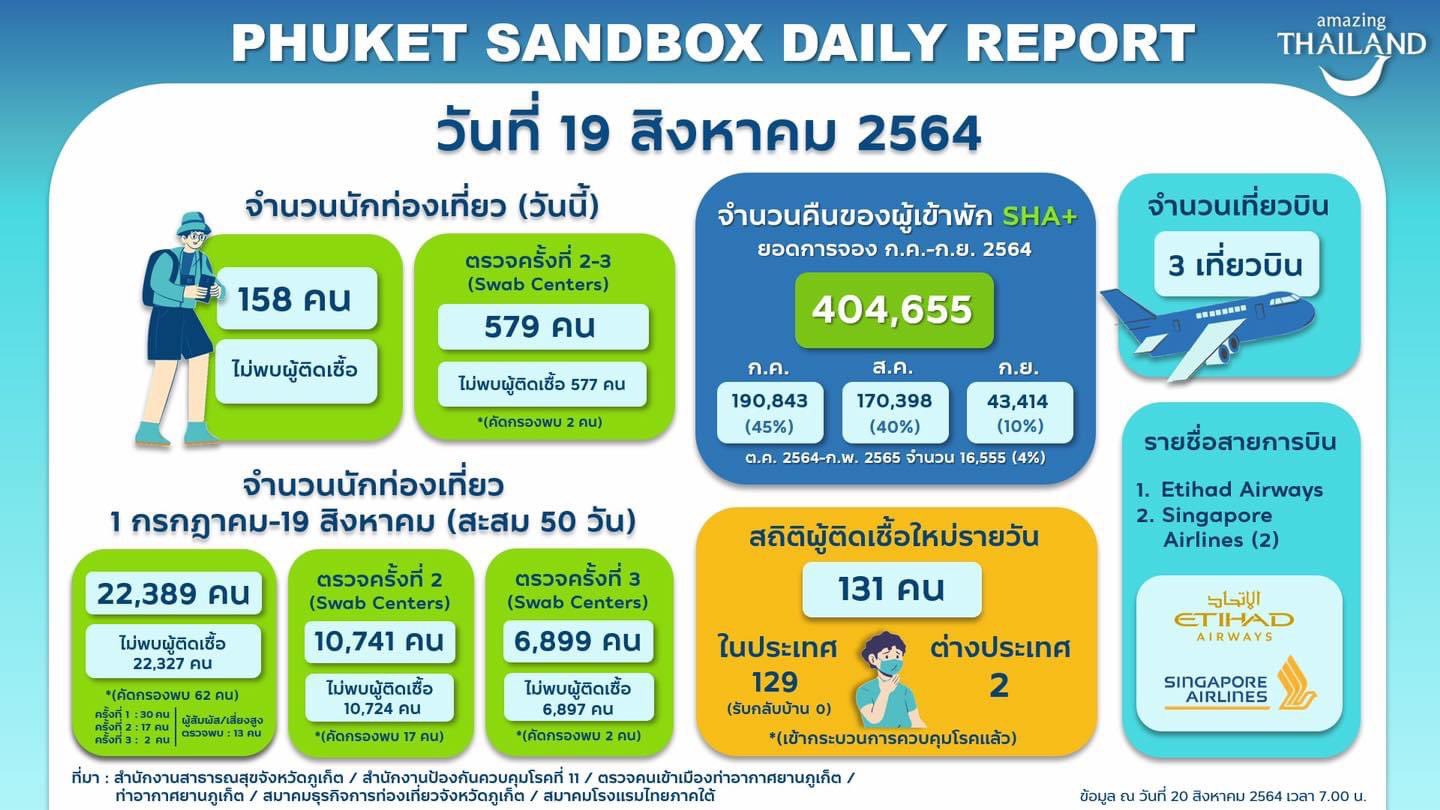 Yes, it is in Thai, but we will explain a few of the most important things, without going into detail about the whole chart. As of this date, 22,389 people have entered Phuket from the Sandbox program, as seen in the lower left-hand green box. The new boxes next to it represent the second and third Covid-19 tests for those that stay that long. The second box is a Covid-19 test around day 7 and the last is around day 13, just before the visitor would be allowed to go anywhere in Thailand. (Although due to the current Covid-19 situation some provinces have additional measures.)

As you can see 22,327 people in total have tested negative for Covid-19 on that first test. 10,724 on that second test, and 6897 on that third test (Only TWO people tested positive on the day 13 test, which is another major reason they now allow visiting other islands after day seven.)

Based on the 22,327 number and a total of 62 positive cases (several unvaccinated children, as they are allowed in), that is a 0.28 percent chance of a foreign vaccinated tourist having Covid-19 after going through the initial process. (Which includes a test in their home country prior to coming.) Interestingly, the vast majority of those positive tested positive on arrival, despite that first test.

Of that 0.28 percent, which is actually around 0.26 or 0.27 due to unvaccinated children, there have been no cases of a “superspreader” or even much spread at all up to this point.  And of those positive, nearly all have been asymptomatic or extremely mild, which means they put no pressure on the hospital system. (Of course, in Thailand, the rules require medical supervision if you test positive but they are gradually starting to further accept self-isolation if available.)

Now, yes, Phuket recorded a record high of Covid-19 cases yesterday-129 new cases. Only two, however, were from vaccinated foreign tourists, the remainder were all from local residents/domestic visitors.

The data so far from the Sandbox, which began on July 1st is pretty clear-the overall risk of vaccinated foreign tourists having and spreading Covid-19 is very low, especially when compared to the domestic situation in Thailand currently. Additionally, one of the pushbacks to letting in visitors at a wider scale right now is hospital availability-but they also show, so far, that the foreign vaccinated tourists don’t put much pressure on that system.

Therefore, it is my belief that Thailand should let in vaccinated foreign visitors on a much wider scale. At the very least, it is the time based on the data to relax the rules and let those who want to come, come. Maybe not “open the total gates” yet, but let’s seriously consider letting them go to most places in the country instead of just the islands (and it’s being considered and likely coming with Chiang Mai and Hua Hin on the agenda).  Ok, I can understand the pushback to let them into areas that are maximum control with major outbreaks like Bangkok and sadly Chonburi (Pattaya.) Regardless, every single visitor that comes will help the local economy currently.

Sure, many people may comment or say why would anyone want to come to a country with many places in partial lockdowns or lots of cases and that is certainly a valid point. However, I am quite sure there are plenty who still would come, even if they are “snowbirds” or ex-pats if the rules are relaxed some. And remember, every single one of these people will spend at least some badly needed money currently. Additionally, other countries like Mexico, Turkey, Dubai, and the Maldives have proven previously that even with many cases of Covid-19 people will still travel, if they are allowed to.

So, in conclusion, I personally believe the Thai government should give some serious thought to letting in vaccinated foreign tourists with significantly fewer rules. They already are discussing it behind closed doors and we may very well see this in Octoberish, but it is something that must be in the back of officials’ minds.

At the very least, continuing the plan of wider sandboxes outside of Phuket (not just safe and sealed, but actual sandboxes), reducing quarantine/sandbox length to seven days, and killing some of the paperwork such as a COE would be a fantastic start to help bring in much-needed income at this difficult time from a segment of the population that, compared to the situation domestically, appears to be fairly low risk.

Thanks for reading, as always. I will be doing a sort of follow-up to this article in the near future around the importance of restoring domestic tourism by quarter four of this year as well and why that should be a major focus. For those not here, I hope the situation improves in the next six months and we can see you all again soon in Thailand! Take care of yourselves, and be safe.