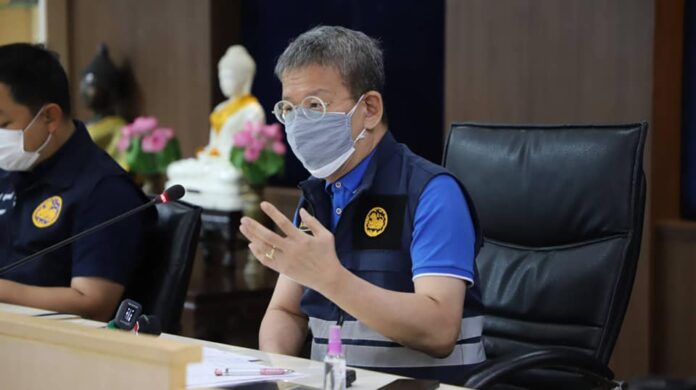 Samut Sakhon governor Veerasak Vijitsaengsri stated through his online social media channels that he has decided to submit a resignation letter to his supervisor today, Monday, August 16th, mainly due to his post-Covid health conditions.

The governor expressed his thoughts via his social media yesterday that his prior Covid-19 infection has caused him many ongoing health issues, such as fatigue, coughing, sneezing, a runny nose, and panting. He also experienced severe right-side spasticity recently.

His status read: “My doctor said that I was stressed out, had little rest, and needed to take care of my body more. But due to my work in Samut Sakhon now it is not possible to be not stressed.”

“I used to dream that I would be able to serve the country until retirement because Samut Sakhon, due to its importance to the economy (primarily fishing/market/exports) is the destination that every government official desires. But today, I have to admit that it was only a dream. The Ministry said that they would consider relocating me to other provinces where covid cases are lighter, but they couldn’t do it in the end.” The governor told reporters that he wrote the online social media status himself and had already drafted a resignation letter which would be submitted to his supervisor sometime today, Monday. The resignation may be effective at the end of September when he would return home to Ang Thong province for rest and better health treatment.

Veerasak tested positive for the Covid-19 Coronavirus in late December 2020 and had been under medical treatment for his severe condition for nearly three months in Siriraj Hospital.

According to Siriraj officials at the time, he was one of the 20 percent of critical Covid-19 patients in Thailand and was equipped with a ventilator for the longest period in the hospital’s history after doctors found a severe lung inflammation. He remained on a ventilator and in the hospital for over three months and as a result, has been well-regarded in Samut Sakhon.

He was discharged from Siriraj Hospital in March and has been under close supervision by medical officials since. More details of his recovery can be found in the article below: