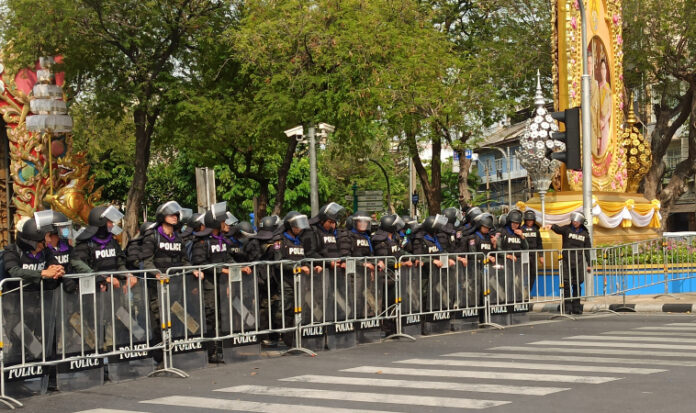 Several groups of pro-democracy protesters and thousands of Royal Thai Police have been confronting each other in Bangkok this afternoon since around 1:00 P.M.

First, we wrote about the planned rally here, click this text to read more about what the protest is about and why police have continually warned it is illegal.

Under multiple current Covid-19 rules and laws in Bangkok and Thailand, any gatherings of more than 5 people are against the law without permission. Additionally, rallies and assemblies in general, regardless of the number of people, are currently banned under Royal Gazette orders. This is on top of communicable disease acts and Bangkok Metropolitan Administration orders that also ban gatherings, assemblies, rallies, and other similar groups of people. The Thai government claims the ban is to stop the spread of Covid-19 and is not political, of which another record high in cases was reached today, with Bangkok being the epicenter of the outbreak.

Protesters, meanwhile, come from a variety of groups including Free Youth and the United Front of Thammasat and Demonstration with multiple goals. Some protesters are also simply those who disagree with the government’s Covid-19 control plans, restrictions, measures, the vaccine rollout and allocation, and Prime Minister Prayut Chan O’Cha. Some protesters are also calling for controversial reform of the highest institution as well as a reduction in budgets for the army and institution. Some want more mRNA vaccines instead of Sinovac or Sinopharm, Chinese brands. The largest demand, however, is the immediate resignation of the Thai Prime Minister due to what protesters say is poor handling of the Covid-19 situation in Thailand.

The protest was originally scheduled to meet at 1:00 P.M. at the Democracy Monument where they planned to march to the palace. However, heavy riot police presence at the monument as well as many barriers, shipping containers, barbed wire, and police on the route to the palace changed the plans of protesters. Free Youth attempted to change the rally point to Government House, but heavy police presence also thwarted this.

At 1:30 P.M. protesters swung back to Victory Monument and announced on social media they would march to the 1st Infantry Regiment where Prime Minister Prayut Chan O’Cha lives.

After close to hours of slow movement due to heavy police presence, protesters and police confronted each other at the Din Daeng Triangle intersection around 4:00 P.M., with police continually warning that the rally and protest were against nearly half a dozen laws and protesters could face huge fines and jail time and should disperse. The protesters did not do so and police reportedly responded with tear gas and rubber bullets, according to witnesses at the intersection. A small number of protesters reportedly had fireworks or slingshots, although the vast majority were unarmed.

Scenes shared on Twitter and social media show a chaotic atmosphere, as protesters and police essentially play cat and mouse with protesters attempting to reach strategic locations but being continually confronted by large numbers of riot control police and barriers.

As of 5:00 P.M., the confrontation remains at a chaotic standstill near the Din Daeng area, with protesters refusing to disperse while engaged in regular conflicts with Royal Thai Police, who have warned they will use water cannons with chemicals injected into the water to disperse protesters. This follows several hours of near non-stop tear gas, rubber bullets, and now water cannons.

As of 5:30 PM, protesters have been forced back by the heavy police presence, including water cannons and hundreds of police marching directly on the protesters. They are falling back, reportedly to the Victory monument area to regroup.

As of 5:40 PM a police vehicle was seen on fire near the Victory Monument. It is unclear who set the fire. Protest leaders have reportedly called off the protest due to concerns about the situation being dangerous.

As of 6:25 P.M., some protesters refused to leave and disperse, conflicting with police. Protest organizers continue to ask protesters to go home on social media by 7:00 P.M.

As of 8:00 P.M., a small group of protesters continued to clash with police who were using tear gas in the response under the Victory Monument BTS. A mandatory curfew is in one hour at 9:00 PM. The clashes and conflicts have now been going on for about seven hours. Police have also been making sporadic arrests.

This is a developing story, further updates may be made here later this evening. Please see our Twitter by clicking here for more in-the-moment updates.