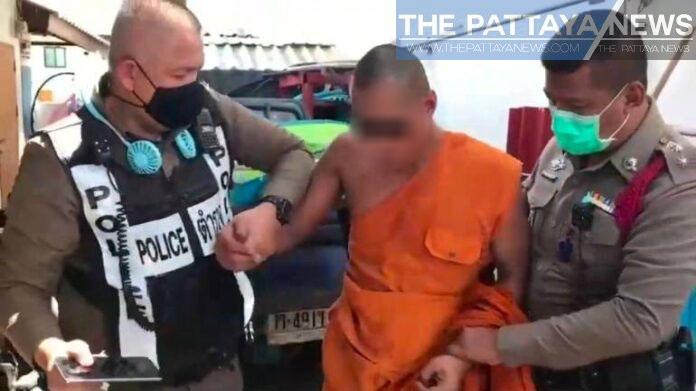 A Buddhist monk was arrested and charged as he was found in possession of crystal methamphetamine after Chonburi police were called to a domestic disturbance at a rental room in Samet over the past weekend.

The Samet Police in Mueang Chonburi were notified of the accident at 2:00 P.M. on Sunday, June 27th, over the past weekend at a rental room in the Samet sub-district.

Police and The Pattaya News reporters arrived at the scene to find Phra Parinya Eiamnitikorn in what was described by police as an emotional state, 32, who is a monk at a temple in Mueang Chonburi.

He was arguing with an unidentified woman in the rental room. Police reportedly found a small bag of one gram of crystal methamphetamine in a cigarette box that was in his possession after the monk submitted to a search. 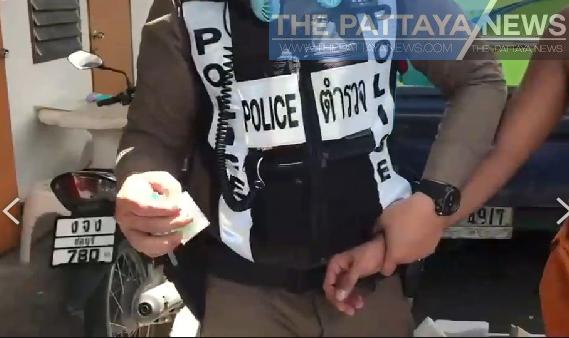 Parinya admitted that he bought the drugs for 400 baht. He brought food from a temple to the woman, who he described as his girlfriend despite Buddhist monk’s vows of celibacy, as she was recently injured from a motorbike accident. They were arguing before he reportedly slapped his girlfriend in the face, leading to a call to police for assistance. It was unclear who called the police and if it was the woman or a nearby neighbor hearing the altercation.

Parinya was taken back to the temple where the Abbott promptly defrocked him for the incident, ending his experience as a monk. He was then taken to the Samet police station to face charges of assault and drug possession.