Most of them were reported with underlying health conditions, including hypertension, diabetes, lung disease, hyperlipidemia, kidney disease, heart disease, strokes, obesity, cancer, and liver disease. One of the fatalities was a bedridden patient. Four of them did not reportedly have any health conditions.

Of the new cases, 2,257 were found in hospitals and medical services (which includes contact tracing cases), 1,706 were from a proactive approach at previously reported clusters, 75 were from prisons, and the remaining 21 were imported cases.

Regarding the non-prison local infections, the highest numbers of patients were reported in Bangkok with 1,154, followed by Samut Prakan with 696, Chonburi with 335 (driven by two large clusters at a market and migrant worker dormitories), Songkhla with 293, Samut Sakhon with 250, and Pathum Thani with 211.

The madrasa was ordered to close last week. Yala’s provincial public health officials are now conducting a proactive approach in the area. Students, worshippers, and their families, including those who came into contact with them, are required to report and seek a Covid-19 test to the district’s health office or nearby hospitals. They may violate the Communicable Diseases Act if they failed to do so. 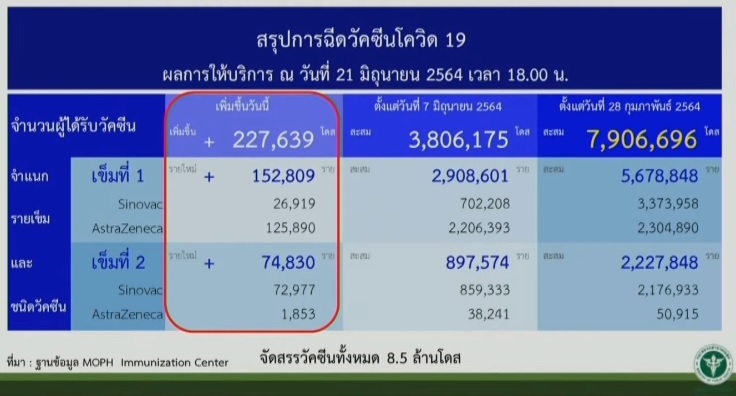 72,977 people had their second shots with a Sinovac vaccine and the second dose was given to 1,853 people with AstraZeneca, marking a total of 74,830 people.

As of today, 2,047 people fully recovered in the past 24 hours and have been released from field hospitals and quarantine centers. Thailand has now reached a total of 225,365 cases with 187,836 recoveries and a total of 1,693 deaths since the start of the pandemic.