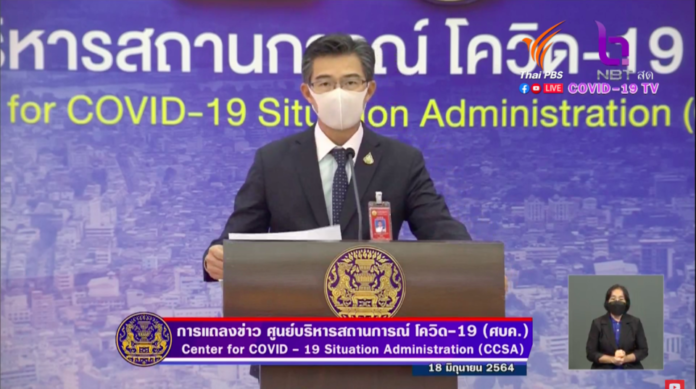 According to the new restriction rearrangements, large gatherings at events are allowed for up to 50 people in the provinces. Air-conditioned restaurants are allowed to open until 11:00 PM. for 50 percent of their capacity (up from 25 percent). However, no alcohol is permitted to be served anywhere.

There are also red and orange zones in which the biggest major difference is normal restaurant capacity levels and higher numbers of people gathering are allowed, although not for entertainment purposes.  Certain high-risk businesses are also allowed to open in these provinces that may not be allowed to open in dark red provinces. Chonburi remains a red province.

For 53 provinces in high surveillance and surveillance areas, aka yellow and green zones (which there are currently no green zones), all restaurants can be operated and sell items as usual, including alcoholic beverages. Phuket will also implement similar measures by next week. Entertainment venues, however, and venues that are only bars, remain closed nationwide. TPN media notes that governors MAY choose to enact stricter and stronger rules if they wish, including keeping alcohol banned and residents should check with their provincial public relations to see provincial level rules.

The CCSA also announced an end of state-funded mandatory quarantine for arrivals from abroad. All Thai nationals will have to enter Alternative Quarantine (AQ) with a self-pay of costs, starting July 1st. Covid-19 testing during quarantine would be subsidized by the government. There may be exceptions to this rule for certain groups who were unable to fund their trips home and were truly “stuck”, however, the rule would be set overall.

According to the government’s latest plan, 10 million doses of Covid-19 vaccines will be allocated nationwide next month. Bangkok will receive at least 5 million doses while 70 percent of local residents in Phuket must be completely vaccinated with 200,000 doses by the end of July. The remaining three provinces in the dark red zones will receive 600,000 shots each.

The other 49 provinces nationwide will be allocated 70,000 doses each while the remaining 1,000,000 shots will be stored and distributed to the central government officials.

CCSA spokesperson Taweesilp Visanuyothin also mentioned the readiness of Phuket Sandbox to be implemented on July 1st. According to the finalized project plan, foreign tourists must be fully vaccinated and come from low-to-medium-risk countries, as listed by the Ministry of Public Health. They are required to stay at an SHA hotel on the island for two weeks before being allowed to traveling elsewhere in the country if tested negative throughout the procedure.

It is also noted by the CCSA that the Phuket Sandbox project can be canceled if the number of domestic infections on the island has reached more than 90 cases per week.