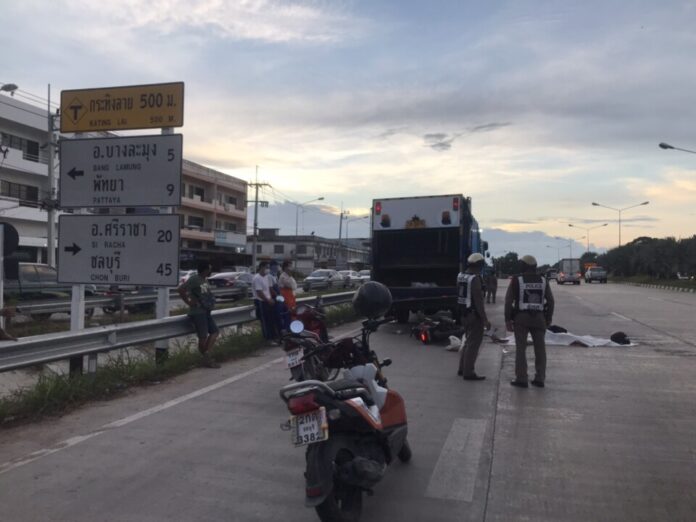 A 43-year-old Pattaya area security guard has been pronounced dead this evening after running his motorbike into the back of a garbage truck, according to Banglamung police.

The accident took place at 6:30 P.M. this evening, June 17th, on Road Number 36, the Pattaya-Rayong Bypass, in Banglamung.
Lt. Col. Yuthaphol Boonkerd, Deputy Inspector General of Bang Lamung Police Station, was the first to be notified of the accident and arrived with Pattaya News reporters and first responders. The deceased was identified by Lt. Col. Yuthaphol as a 43-year-old security guard working for a Thai oil company, who was pronounced dead at the scene of the accident. The Pattaya News has withheld his name at this time pending further notification of his relatives and family.
The driver of the garbage truck, who was not injured, did not give a detailed recap of the incident and only expressed his regrets for the accident and the deceased. He accompanied Lt. Col. Yuthaphol and other police to a local police station for further investigation, including reviewing CCTV in the area. His name was not immediately released by law enforcement investigators at the scene of the accident.

There were many bystanders at the scene of the accident following the crash, however, all of them claimed to have not seen what exactly happened. Based on evidence at the scene, it initially appeared that the victim had run his motorbike into the back of the garbage truck, based on the positioning of the body and the damaged vehicles.