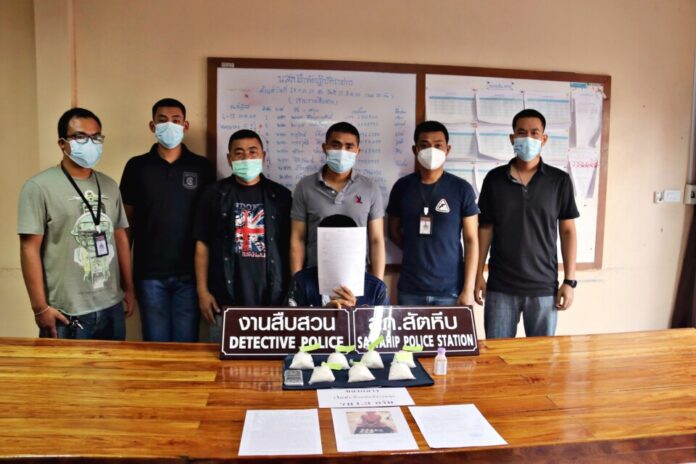 The Sattahip Police have arrested a suspect in Rayong with more than 700 grams of crystal methamphetamine this week. The suspect claimed he was unemployed and had no money and resorted to drug dealing due to the Covid-19 situation. The arrest follows police receiving a tip-off from a concerned citizen that Pond was selling drugs in Sattahip. Police conducted a sting operation before arresting the suspect.

The suspect reportedly admitted to police he bought the drug from a man named only as Mr. Ma Herb. He then sold the drugs for what he claimed was 500 baht per gram. Pond reportedly blamed the Covid-19 situation for causing him to lose his prior job and the overall economy and lack of tourists which led him to sell drugs. He did not blame his own behavior. Pond also claimed he did not know how to contact or reach “Mr. Herb”.

Pond tested positive for the usage of drugs as well, according to Sattahip police. He is facing charges of illegal possession of category 1 drugs with intent to sell and illegally taking drugs. Pond remains in custody as of press time.