Regarding domestic infections, the first group of 1,758 local infections was discovered in Bangkok. 41 of them were reportedly connected to community markets and villages, 1,029 were from being in close contact with confirmed infected patients (many in prisons), and the other 688 infections were connected to other risky places. Other risky places are generally those such as private house parties, drinking circles, workplaces without sufficient social distancing measures like some construction or factories, densely packed communities like migrant workers camps, crowded markets or temples, and similar locations.

The second group includes 1,049 cases that were reported in Bangkok’s vicinity. One of them was reportedly connected to entertainment venues, 221 were connected to community markets and villages, 391 were from being close contact with confirmed infected patients, and the other 436 cases were connected to other risky places.

The last group includes 662 domestic infections that were found in other provinces. 38 were reportedly connected to community markets and villages, 354 were from being in close contact with confirmed infected patients (many in prisons), and 270 of them were connected to other risky places. The majority of the group was discovered in Samut Prakan with 457, followed by Nonthaburi with 163, Pathum Thani with 162, and Chonburi with 127. 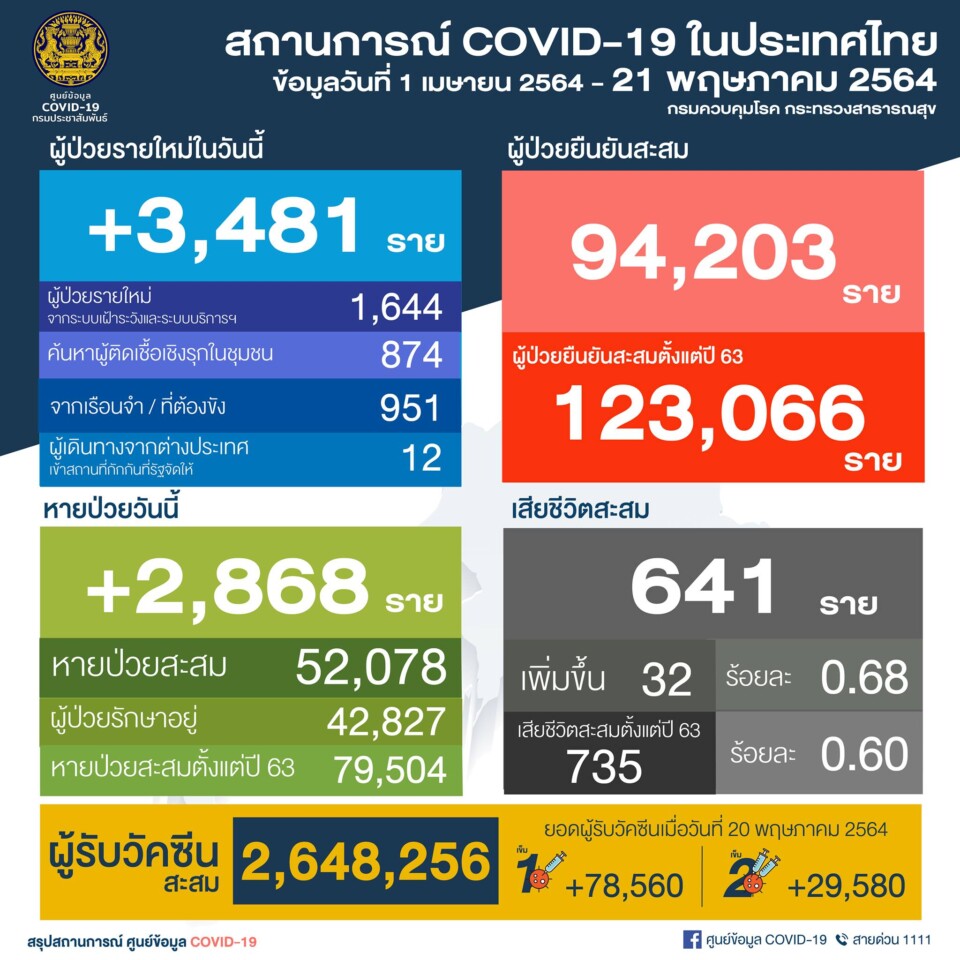 As of today, 2,868 people fully recovered in the past 24 hours and have been released from field hospitals and quarantine centers. Thailand has now reached a total of 123,066 cases with 79,504 recoveries and a total of 641 deaths since the start of the pandemic. About 78,560 people received their first shot of a Covid-19 vaccination and another 29,580 people received their second shot yesterday, marking a total number of 2,648,256 vaccinated people in Thailand who have received at least one dose of a vaccine.

The CCSA has agreed to extend the Emergency Decree for another two months due to the current outbreak of the Covid-19 pandemic, from June 1st until July 31st, 2021. It has been extended for the 12th time since its first implementation in March last year.

Furthermore, the CCSA has also decided that schools and educational institutions in the four “Dark Red zones” provinces, namely in Bangkok, Nonthaburi, Pathum Thani, and Samut Prakan, will remain closed and must conduct online learning instead.

As for “red” and “orange zones”, schools can be opened but should be limited in their capacity if they are given permission by local authorities. If so, gatherings of more than 50 people is not allowed. Students, teachers, and all education personnel at schools must wear facial masks at all times. 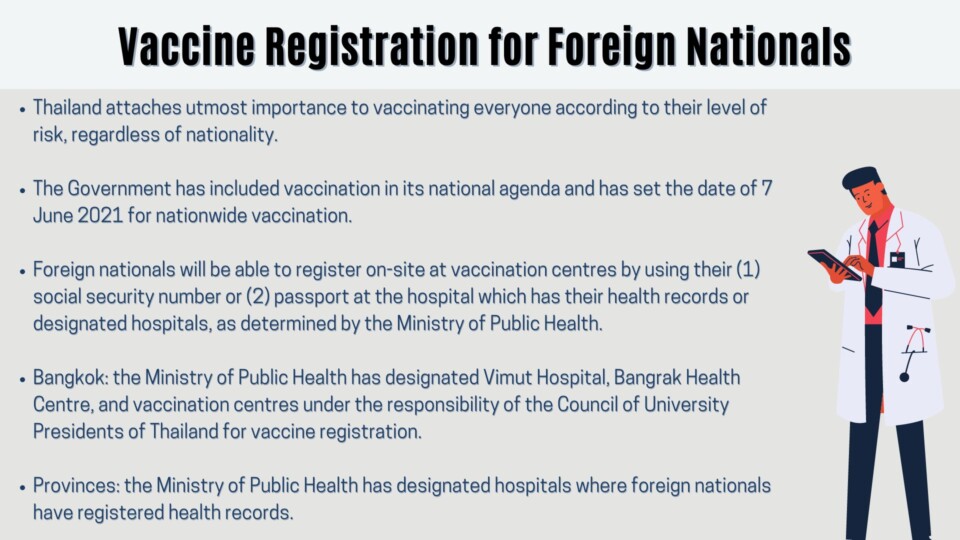 Regarding vaccination for foreign nationals, they will be able to register on-site at vaccination centers by using their social security number or passport at the hospital which has their health records or designated hospitals listed by the Ministry of Public Health. IT DOES NOT START UNTIL JUNE 7TH.

We expect more information for Chonburi specifically will come before the June 7th date. These are for the government’s mass vaccination program, not private vaccination, in which you would need to register at a private hospital. There is no timeline on when private supplies of Moderna or other vaccines would arrive.

As this starts in June, the vast majority of people taking part in the government program would get AstraZeneca.